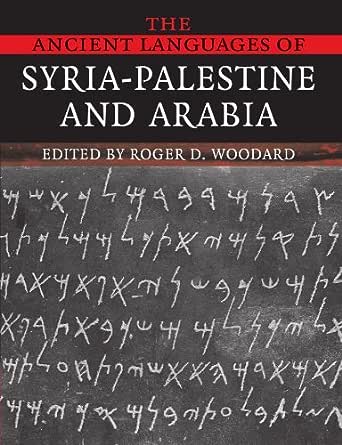 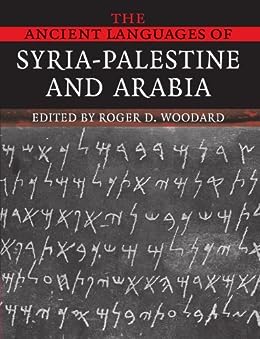 Roger D. Woodard is the Andrew Van Vranken Raymond Professor of the Classics at the University of Buffalo. His numerous publications include The Cambridge Encyclopedia of the World's Ancient Languages (2004). --Este texto se refere à edição paperback.

This book describes the ancient languages of Syria-Palestine and Arabia, for the convenience of students and specialists working in that area. Each chapter examines the writing system(s), phonology, morphology, syntax and lexicon of a language, and places that language within its proper linguistic and historical context. --Este texto se refere à edição paperback.

Dick Grune
4,0 de 5 estrelas Comprehensive information about the Semitic languages before 476 AD
Avaliado no Reino Unido em 13 de dezembro de 2012
Compra verificada
This is volume five of the Cambridge Encyclopedia of the World's Ancient Languages, a collection of 45 entries covering in principle all languages of which sufficient recorded material is available from before 476 AD to write a meaningful entry about. All entries are of superb quality, so I'll restrict myself to specific comments on the entries in this volume.

This is to a certain extent the least exciting of the five volumes, not because of the text itself, but because the languages of the Near East are so similar; no juicy Etruscan, Hurrian, or Elamite here. The volume covers Ugaritic, Hebrew, Phoenician/Punic, Canaanite dialects, Aramaic, Ancient South Arabian, and Ancient North Arabian, all of them squarely Semitic.

Ugaritic is much more conservative than Hebrew, with the three traditional Semitic cases nominative, genitive, and accusative still fully operative, and is very interesting. Although I am reasonably familiar with the subject, I had to read several explanations in this chapter twice, because they are often less than intuitive. An example (page 31): "Personal pronouns agree ... with an appositional verb." Huh? I thought the verb agreed with the personal pronoun (actually both agree with the actual person, of course).

Hebrew: Since the development of Hebrew from Proto-North-west Semitic is mainly driven by vowel and stress shifts, these are treated in depth.

Phoenician/Punic: The differences between Phoenician/Punic and Hebrew are minute. The few differences are specified. By the way, comparison of the Phoenician alphabet in the table in this chapter with the text on the cover of the book shows how far practice can deviate from theory.

Aramaic: All Aramaic text in this chapter is written without vowels, although in many cases the vowels are known. Somehow this gives the language a more arcane flavour than is necessary.

Ancient South Arabian, spoken from the 8th century BC until the 6th century AD in and around Yemen, was written in an impressive monumental script, of letters sometimes 30 cm. high, practically without vowels. At the other extreme, thousands of wooden sticks have come to light in Yemen in the 1970s, inscribed with minuscule letters.
The chapter features a very extensive and illuminating section on the syntax of Ancient South Arabian, in which quite complicated sentences are analysed. The literature references show that this is a speciality of one of the authors of the chapter.

Ancient North Arabian consists of a dozen dialects, one for each oasis and then some, written in a very variable alphabet that left great freedom to the individual scribent as to letter form and writing direction: some text is written vertically or in a spiral. Tens of thousands of small texts have been found. Tables are given of how the Proto-Semitic sibilants fared in Ancient North Arabian (two dialects), and in Arabic (before and after the 9th century AD). Many verb forms in the various binyanim are known and reported here, mostly of the 3rd person.
Here we finally find some hard evidence on the origin of the Hebrew determinate article `ha-' with gemination of the following consonant: some Ancient North Arabian dialects have `hn-' before aleph, ayin and chet. The author interprets this as a local development, but assimilation of the `n' to the following consonant would explain the gemination. And this `hn-' could be related to Hebrew `hineh' = this-is.

Classical Arabic is too young to be included in this series, unfortunately.

These five books are going to get prime estate in my book case!