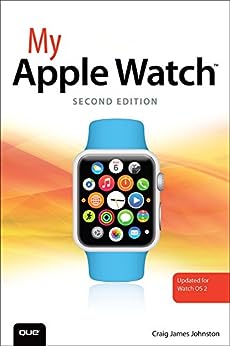 Craig James Johnston has been involved with technology since his high school days at Glenwood High in Durban, South Africa, when his school was given some Apple ][ Europluses. From that moment, technology captivated him, and he has owned, supported, evangelized, and written about it.

Craig has been involved in designing and supporting large-scale enterprise networks with integrated email and directory services since 1989. He has held many different IT-related positions in his career, ranging from sales support engineer to mobile architect for a 40,000-smartphone infrastructure at a large bank.

In addition to designing and supporting mobile computing environments, Craig cohosts the CrackBerry.com podcast as well as guest hosting on other podcasts, including iPhone and iPad Live podcasts. You can see Craig’s previously published work in his books Professional BlackBerry, My iMovie, and many books in the My series covering devices by BlackBerry, Palm, HTC, Motorola, Samsung, and Google.

Craig also enjoys high-horsepower, high-speed vehicles and tries very hard to keep to the speed limit while driving them.

Originally from Durban, South Africa, Craig has lived in the United Kingdom, the San Francisco Bay Area, and New Jersey, where he now lives with his wife, Karen, and a couple of cats.

Craig would love to hear from you. Feel free to contact Craig about your experiences with My Apple Watch at http://www.CraigsBooks.info.

All comments, suggestions, and feedback are welcome, including positive and negative.

C. S. Winter
5,0 de 5 estrelas Brilliant Manual
Avaliado no Reino Unido em 27 de abril de 2017
Compra verificada
Having used various Apple items for some years, I was presented with a new iWatch. First, what an amazing piece of kit this is! However, Apple seem to offer less and less "paper support" with their products, so the iWatch was indeed daunting to use to commence with. This book in my opinion is simply brilliant, offering straightforward advise on the subject. As with all manuals by QUE publishers is is so well printed once again. I have always liked the idea of having the various items marked up with numbers and then clearly referred to in the write up. Once again this author has adopted this format to his credit. Very clearly written and easy to follow. First class book, highly recommended, especially to a newcomer like myself.
Ler mais
1 pessoa achou isso útil
Informar abuso
Traduzir avaliação para Português

David J. Schneider
4,0 de 5 estrelas Good for OS2 -- not for OS3
Avaliado nos Estados Unidos em 28 de fevereiro de 2017
Compra verificada
This book does discuss OS2 which I mistakingly read as Apple 2. When I bought my Apple Watch I wasn't aware that there had been an upgrade to OS3. So my bad.

If you are still working with OS2 this is an excellent book in line with most QUE books devoted to visual instruction. I want to emphasize that because it's not the author's fault that I misread what I was getting and didn't catch on to the OS upgrade.So far as I can tell there is no book on OS3. That said, Apple has a very clear set of instructions for the new OS and so you really don't need a book.

The book has a good description of "glances" which are not present in OS3, and no discussion of the Dock which replaced it. Circle of Friends is no longer present which makes calling a limited set of people harder. Easy enough to have Siri make the call -- obviously the Watch is not the best vehicle for making phone calls anyway. OS3 is apparently a lot faster.

So if you're still using OS2 this book would be useful. If you buy an Apple Watch 2 now presumably it will have OS3. I'm guessing that the folks most in need for a book would be those, like me, who have recently bought a watch and for that you need either to read Apple's clear instructions or use this book for most of the stuff which is the same from 2 to 3.

P. A. Hendricks
5,0 de 5 estrelas A superb manual!
Avaliado nos Estados Unidos em 19 de abril de 2016
Compra verificada
There is a number of books dedicated to the Apple watch, a couple of which are embarrassingly bad. This one, however,
has the virtue of being well thought-out, comprehensive,and engagingly presented. Highly recommended, and the only guide
you'll ever need.
Ler mais
7 pessoas acharam isso útil
Informar abuso
Traduzir avaliação para Português

Patricia N. Fisher
5,0 de 5 estrelas The Apple of my Eye
Avaliado nos Estados Unidos em 22 de abril de 2017
Compra verificada
This is a great reference tool. It is not a book to sit down and read. Rather, it is a book to search and find what the user needs. Browsing through, I have found several new things I wanted to add to my watch, and several I could remove. I think this is a must for Apple watch users.
Ler mais
2 pessoas acharam isso útil
Informar abuso
Traduzir avaliação para Português