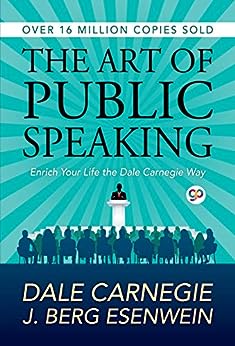 A pioneer in the field of self-help, Dale Carnegie distilled his experiences as a salesman and lecturer in his first guide to successful speech-making, The Art of Public Speaking. This predecessor to his bestseller, How to Win Friends and Influence People, was co-written with J. B. Esenwein. Its direct, practical advice for emphasizing ideas for easy comprehension and high impact ranges from finding an appropriate rhythm to conquering stage fright.
Avoiding the use of tricks and shortcuts, the authors suggest methods for developing one's thoughts in order to form an original, authentic manner of speaking. They advise speakers to practice their presentation skills, offering useful tips for speech-making in both personal and professional situations. First published in 1915, this classic continues to encourage people from all walks of life to overcome their self-consciousness and increase their effectiveness and comfort as public speakers.
www.doverpublications.com

Dale Carnegie was an American self-improvement lecturer and author. Born in 1888, Carnegie was the son of a farmer, and worked throughout his childhood helping his parents with various tasks on the farm. He was fortunate, however, in that he was able to obtain an education in his young adulthood at a nearby Teacher s College. Carnegie worked as a salesman and an actor before he took up teaching public speaking courses at a New York YMCA branch, where he was living at the time. Carnegie s public speaking career took off, and through his success he was able to have several of his books published. His first book, Public Speaking: a Practical Course for Business Men sold well, but his most impressive achievement was the publication of his book How to Win Friends and Influence People, which was an immediate bestseller when it was published in 1936, and has gone on to sell millions of copies in thirty-one languages. Carnegie also worked to open the Dale Carnegie Institute, a learning-ground for those interested in his public speaking and self-improvement techniques, and Dale Carnegie courses are still taught today. Carnegie died of Hodgkin s Disease on November 1, 1955. --Este texto se refere à uma edição alternativa kindle_edition

Ayodele Olusanya
4,0 de 5 estrelas Still in vogue
Avaliado no Reino Unido em 13 de outubro de 2008
Compra verificada
Althought this book was first published way back - it is still very much relevant to the current and future intricates of Public Speaking. The authors have been able to carefully discuss the various aspects of the act of speaking publicly in a way that is relevant to both those who are experienced speakers and those who are aiming to become top notch speakers.
Ler mais
2 pessoas acharam isso útil
Informar abuso
Traduzir avaliação para Português
Visualizar todas as avaliações
Voltar ao início
Conheça-nos
Ganhe dinheiro conosco
Deixe-nos ajudá-lo
Pagamento
E não se esqueça:
© 2012-2021, Amazon.com, Inc. ou suas afiliadas