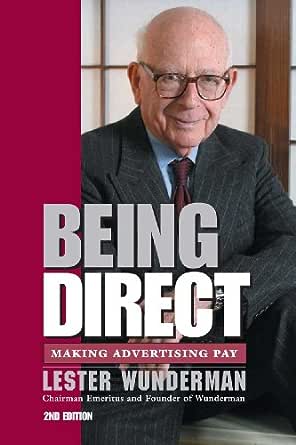 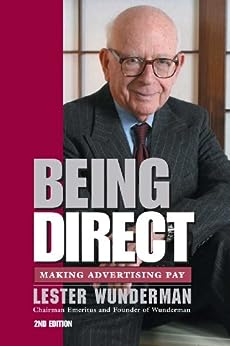 Lester Wunderman's Being Direct: Making Advertising Pay truly is both informative and entertaining. It combines an extraordinary personal history of "direct marketing" with a remarkably candid look at the field's most acclaimed practitioner. Written in an easy-going and deliberately persuasive style obviously honed during Wunderman's six decades in the trenches, the book shows his skill developing and gaining acceptance as he creates revolutionary advertising programs for future corporate stalwarts like the Columbia Record Club and American Express. --Este texto se refere à uma edição esgotada ou disponível no momento.

Lester Wunderman is Chairman of Wunderman, Cato, Johnson and Senior Adviser to the Board of Directors of Young and Rubicam, with which it merged in 1973. He has received countless awards for his contributions to the field of direct marketing and has been named to the Direct Marketing Hall of Fame. He has served as Director and Secretary Treasurer of the American Association of Advertising and was Director of the Advertising Council. This is his first book. He lives in New York City with his wife, Sue Cott. --Este texto se refere à uma edição esgotada ou disponível no momento.

1. Direct Marketing Is a Strategy, Not a Tactic
It's not an ad with a coupon, it's not a commercial with a toll-free number, it's not a mailing, a phone call, a promotion, a database, or a Web site; It's a commitment to getting and keeping valuable customers.

2. The Consumer, Not the Product, Must Be the Hero
The product must create value for each of its consumers. It must satisfy consumers' unique differences, not their commonalities. The call of the Industrial Revolution was manufacturers saying, "This is what I make, don't you want it?" The call of the Information Age is consumers asking, "This is what I need, won't you make it?"

3. Communicate with Each Customer or Prospect as an Audience of One
Advertising must be as relevant to each consumer as the product or service is. General advertising and more targeted direct marketing must both be part of a holistic communication strategy.

4. Answer the Question "Why Should I?"
The most dangerous question a prospect or customer asks is "Why should I?" And he may ask it more than once -- but never of you. The product and its communication stream must continue to provide him with both rational and emotional answers.

5. Advertising Must Change Behavior, Not Just Attitudes
Favorable consumer attitudes go only part of the way to creating sales. It's also the consumer's accountable actions such as inquiries, product trials, purchases, and repurchases that create profits.

6. The Next Step: Profitable Advertising
The results of advertising are increasingly measurable; they must now become accountable. Advertising can't be just a contribution to goodwill -- it must become an investment in profits.

7. Build the "Brand Experience"
Customers have to know and feel the brand as an experience that serves their individual needs. It has to be a total and ongoing immersion in satisfaction that includes everything from packaging to point of purchase, repurchase, and after-sale service and communications.

8. Create Relationships
Relationships continue to grow -- encounters do not. The better the buyer-seller relationship, the greater the profit.

9. Know and Invest in Each Customer's Lifetime Value
One automobile dealer calculated that a lifetime of cars sold to one customer would be worth $332,000. How much should a marketer spend to create such a loyal lifetime customer for a given product or service?

11. Media is Contact Strategy
Measurable results from media, not the number of exposures, are what counts. Measurements such as "reach" and "frequency" are out of date. Only "Contacts" can begin relationships.

12. Be Accessible to Your Customers
Be there for your customers--be their database and source of information and service through as many channels of communication as possible. They can't tell you what they need unless they can reach you.

13. Encourage Interactive Dialogues
Listen to consumers rather than talk at them. Let them "advertise" their individual needs. They'll be grateful for your responsiveness. Convert one-way advertising to two-way information sharing.

14. Learn the Missing "When?"
The answer "Not now" is as dangerous to advertising as "Not this." Only consumers know when they are ready to buy, and they will tell you if you ask them in the right way.

15. Create an Advertising Curriculum That Teaches as It Sells
A "curriculum" is a learning system that teaches one "bit" of information at a time. Each advertising message (bit) can build on the learning of the previous one. It can teach consumers why your product is superior and why they should buy it.

17. Loyalty Is a Continuity Program
"Totally satisfied" customers are least likely to fall away. Those who are merely "satisfied" may fall away without warning. To build ongoing relationships, rewards for good customers should be tenure-based (on previous purchases, usage behavior, and length of relationship). Rewarding "tenure" can prevent competitors from "conquesting" your best customers.

18. Your Share of Loyal Customers, Not Your Share of Market, Creates Profits
Spend more on the good customers you have. Ninety percent of most companies' profits come from repeat customers. It costs six to ten times as much to get a new customer as to keep an old one.

19. You Are What You Know
Data is an expense -- knowledge is a bargain. Collect only data that can become information, which, in turn, can become knowledge. Only knowledge can build on success and minimize failure. A company is no better than what it knows. --Este texto se refere à uma edição esgotada ou disponível no momento.
Leia mais

William Lee
4,0 de 5 estrelas Direct and To The Point
Avaliado nos Estados Unidos em 25 de abril de 2013
Compra verificada
Mr. Wasserman's ideas and opinions about interactivity in advertising and the idea of Permission Marketing preceded the changing marketing environment we see now by about 20 years. His book covers a lot of valuable tips and tools and reasons why in an easy to read style. Everything we do is about direct marketing, and everyone does it: teachers with students; husbands to wives (usually not the other way around); parents to children. Whether you want to communicate an idea or sell or promote a product or service, this book can help.
Ler mais
2 pessoas acharam isso útil
Informar abuso
Traduzir avaliação para Português

Mr JHS
5,0 de 5 estrelas For every marketer
Avaliado nos Estados Unidos em 5 de setembro de 2012
Compra verificada
I have had the pleasure and honor of knowing and working with Lester Wunderman and still found this book informative adv full of new ideas. I can't imagine the impact on a relative newcomer to the field. It's absolutely brilliant. I can guarantee you at least five new ideas for your business.
Ler mais
1 pessoa achou isso útil
Informar abuso
Traduzir avaliação para Português