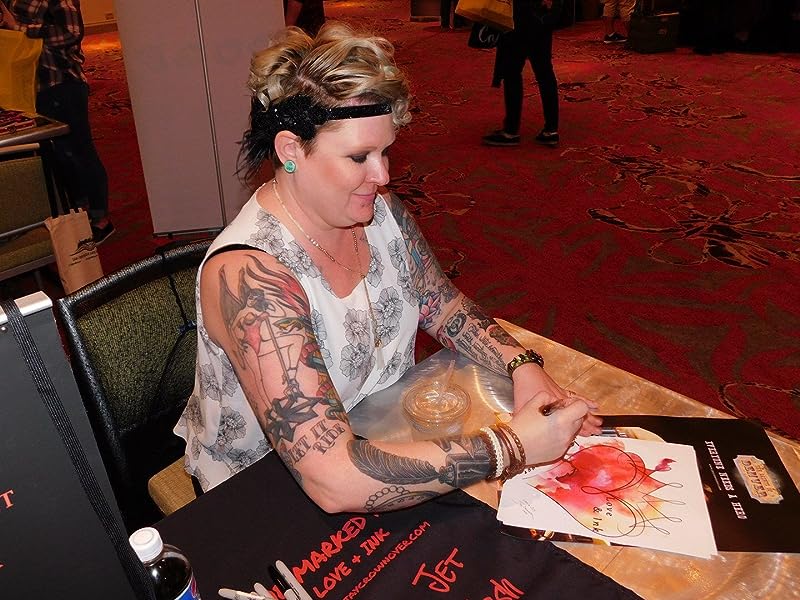 Jay Crownover is the international and multiple New York Times and USA Today bestselling author of the Marked Men series, the Saints of Denver series, the Point series, Breaking Point series, the Getaway series, and the Loveless, Texas series. Her books have been translated in many different languages all around the world. She is a tattooed, crazy haired Colorado native who lives at the base of the Rockies with her awesome dogs. This is where she can frequently be found enjoying a cold beer and Taco Tuesdays. Jay is a self-declared music snob and outspoken book lover who is always looking for her next adventure, between the pages and on the road.
Learn more:
www.jaycrownover.com
Twitter @JayCrownover
Facebook.com/AuthorJayCrownover

Marian Chawner
5,0 de 5 estrelas Love can conquer opposites
Avaliado no Reino Unido em 11 de novembro de 2020
Compra verificada
This series about the Lawsons, their family and the people they fell in love with in the town of Loveless has been so absorbing, adorably interesting, and saw awkward to put down. The last in the series is Blacklisted. Two polar opposites meeting under life changing circumstances. Shot a president of an MC called the Sins of Sorrow, is bleeding out after a battle at Kody’s bar. Presley happens to be called upon to assist the injured, unconscious guy. We have met Shot before in one of Jay’s previous groups of stories. Rome. Even then he was a wickedly charismatic character, and I’m so
Pleased Jay has revisited him and breathed life into this character. He s everything a bad hard man should be, but when Cupid fires that arrow he doesn’t stand a chance, and neither does the workaholic, recently bereaved Presley. Not only has she lost her Mother but she has gained a new family, the Lawsons. Unfortunately she also has a horrible friend who is responsible for many of the negative events in her family and life, to the point she has to leave her job for a while. The story unfolds and I will not discuss it further, so I don’t ruin it for the reader. However what I will say is the book is well written, flows well. Is written from both Shot’s and Presley’s point of view. It is about uncertainty, trust, honesty, building relationships, and totally romantic encounters. It has sizzling drama, and annoying intrigue, romance that sets your heart alight, but most of all it has a totally believable theme. Opposites do attract, and compromises can lead to satisfactory conclusion.

NixyPixy
5,0 de 5 estrelas Who doesn't love a Country MC cross over
Avaliado no Reino Unido em 2 de dezembro de 2020
Compra verificada
So Ms Crownover does it again! Continuing on the Loveless saga/drama/damn good reading series we are now working in Shot and Presley stories.
I don't write plot reviews, I just say why I liked it and if necessary why I didn't.
Firstly Jay's writing is consistent, and the series has been exciting with a good mixture of romance and story. Yay for characters who have a life!
I would recommend that you start at the beginning. And if you like this series you will definitely like the other series Jay has written.

aysha
5,0 de 5 estrelas Beautiful opposites attract romance
Avaliado no Reino Unido em 21 de novembro de 2020
Compra verificada
I loved reading shot and presley’s story. I liked how they are so opposite but come together so beautifully. Presley got to see shots soft side and he dragged out a little wild side to her. I like that they was each others comfort. The crescendo was funny to read knowing how difficult must have been for shot to follow someone elses rules but he did it. Loved it was beautifully written.
Ler mais
Informar abuso
Traduzir avaliação para Português