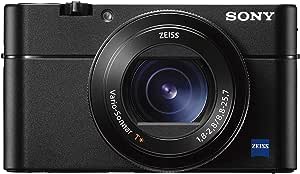 Elephants Never Forget
5,0 de 5 estrelas Still the best in its class
Avaliado no Canadá em 6 de setembro de 2018
Compra verificada
The Sony RX100 has been around for almost 6 years and apart from small to medium updates and improvements from revision to revision, it's remained largely unchanged in form factor. There are countless in-depth reviews on the RX100 mark 5 out there already, so I'm not going bore you by going over all the specs in detail. With more modern offerings being released by Sony's competitors, namely Canon and Panasonic, the RX100 series is one of the more dated and still the most expensive option in its category. And with the new RX100 mark 6 being announced, the question is, is it still worth buying the mark 5, or should you look at other alternatives?

When the original RX100 came out in 2012 it was almost in a class of its own. There weren't any other companies offering such a compact camera with a 1 inch sensor and image quality that rivaled that of the leading micro four thirds cameras at the time. Now it has some tough competition with Canon's G7X mark 2 and Panasonic's LX10 and each provides advantages and disadvantages over the Sony. So how does the RX100 mark 5 stack up?

EXTERIOR
The body is pretty solid but it doesn't quite have the build quality of the G7X mark 2. It squeaks and creaks a little bit when you squeeze it or press some of the buttons and the finish is smooth and slippery with no finger grip. Sony sells a rubberised grip as an add-on, which I think is an essential purchase, but after 5 iterations of this camera it kinda sucks that they still haven't put this on the camera body as standard or at least include it in the box.

EXTERNAL CONTROLS
External controls are a bit more limited than you find on DSLRs and most mirrorless cameras, with a single dial wheel on the back that I set to control aperture and shutter speed, and a notch-free control ring around the lens - mine is set for ISO.

There's a built in pop up flash and it can be bounced, which is the only way I ever use pop up flashes. The screen flips up 180 degrees for selfies and vlogging but it's not a touch-screen. And contrary to the majority opinion, I love that it isn't a touchscreen. My previous camera, the Canon EOS M3 had one and I was always consciously trying not to touch it, for fear of unwittingly changing the settings. Plus, with a non-touch screen you can wipe away those constant finger marks without messing anything up.

MENU
What put me off the RX100 mark 5 initially, was the menu. Everyone complains about the unintuitive menu design and I have to agree; I wish Sony would give it a major overhaul. But, once you get everything set up the way you want it, it gets easier after a few weeks and it only takes about 7 years to start making sense of it.

VIDEO
The video quality is truly excellent but it's the vast wealth of professional features and customisation that sets this camera apart from its competitors. Frame rates of 24, 30, 60 and even 120 can all be used with full manual control of all settings and there are lots of customisable picture profiles for professional grading. It's amazing how much control this camera gives the user for video work, which is why I bought it. If 120 fps isn't enough, there's a mode that makes this camera a total outlier in its class - a mode so special , it gets its own place on the mode dial. HFR or High Frame Rate lets you record at 240, 480 and 960 frames per second. And it's not just a gimmick. While the 960fps mode is pretty grainy, the lower frame rates are certainly useable, and even the 960 can be used to get some interesting effects if you can live with the softer look.

EVF
The pop up viewfinder is useful in bright sunlight. I rarely use it but on those occasional days when I just can't see the main display, I'm glad to have it.

STILLS
As a stills camera the RX100 mark 5 isn't going to give your 5Dmk4 a run for its money in terms of image quality, but for a compact camera it's at the top of its class. And it's fast, Really fast. That goes for autofocus too - just ridiculously fast.
The one inch sensor might seem large for a compact camera if your previous camera is more than a few years old, but compared to APSC or full frame sensors it's tiny. And still, the RX100 mark 5 manages to capture sharp, detailed, beautiful 20 megapixel images.

For me though, it's all about the video. I've had more expensive cameras with much larger sensors and none of them could give me the video features that the RX100 mark V can. When I watch back some of the clips I'm still amazed that they came out of this tiny pocket sized black box.

CONCLUSION
So after all is said and done, is the RX100 mark 5 still worth buying in 2018? For me the answer is absolutely yes. To have this many features and this much quality in such a portable package is kind of a dream come true. Does it match the quality of a full frame DSLR? No. But it's a camera I always have with me, wherever I go. And that means when something magical happens in the environment around me, I have a way to capture it, while my DSLR is perched on a shelf at home.

nikon1v1
4,0 de 5 estrelas very compact, hefty biest
Avaliado no Canadá em 16 de janeiro de 2020
Compra verificada
This is a nice camera, especially when furnished with an extra grip. The lens is better for low light than the models VI, VII, but cuts out at 70mm (equivalent). Since I don't plan much video use, the older model V (cost me 200 can $ less than the VA during New Year's sale) is perfectly fine. Weaknesses: battery; close-up (macro mode) works only at the zoom-out end of the lens, otherwise no focusing. These are costing a star! Even with the (wooden) grip it can be pocketed. It's not super-light, and you want some extra batteries (Sony's are too expensive). The latter part makes the grip situation a bit problematic, since it requires removal. Sony would have done better using a body that has the grip, AND allows for a bigger-capacity battery! It would still be pocketable, as mine is with the grip attached. No touch screen on this model.
Ler mais
Informar abuso
Traduzir avaliação para Português