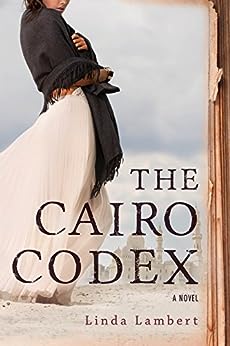 Edição Inglês por Linda Lambert (Autor) Formato: eBook Kindle
Ver todos os formatos e edições
Sorry, there was a problem loading this page. Try again.
When an earthquake nearly buries anthropologist Justine Jenner in an ancient crypt, she finds what appears to be an ancient codex which, if real, could radically threaten the world's great religions.

The Cairo Codex is a riveting novel of two women, two millennia apart, set in the exotic cultures of ancient and present-day Egypt. Dr. Justine Jenner has come to Cairo to forge her own path from the legacies of her parents, an Egyptian beauty and an American archaeologist. After an earthquake nearly buries her alive in an underground crypt, she discovers an ancient codex, written by a woman whose secrets threaten the foundations of both Christian and Muslim beliefs. As political instability rocks the region and the Muslim Brotherhood threatens to steal the Egyptian Revolution, Justine is thrust into a world where even those she trusts may betray her in order to control the codex’s revelations.
Leia mais
Previous page
Next page

Linda Lambert, Ed.D. is Professor Emeritus from California State University, East Bay, and a full-time author of novels and texts on leadership. During Linda's career extensive career, she has served as social worker, teacher, principal, district and county directors of adult learning programs, as well as university professor, state department envoy to Egypt, and international consultant. Her international consultancies in leadership have taken her to the Middle East, England, Thailand, Mexico, Canada, Thailand, and Malaysia. Linda is the author of dozens of articles and lead author of The Constructivist Leader (1995, 2002), Who Will Save Our Schools (1997), and Women's Ways of Leading (2009); she is the author of Building Leadership Capacity in Schools (1998) and Leadership Capacity for Lasting School Improvement (2003). She lives with her husband, Morgan, a retired school superintendent, on The Sea Ranch, CA. --Este texto se refere à edição paperback.

weebiscuit
3,0 de 5 estrelas A near hit or a near miss... one or the other!
Avaliado nos Estados Unidos em 20 de setembro de 2014
Compra verificada
I wavered between three and four stars and settled on three. On the one hand, this book was very well researched as regards the historical aspects, such as the relationship between the Copts and Muslims in Egypt, and landmarks, roads, and buildings. Either the author actually lived in Cairo, or she studied every map she could lay here hands on.

The premise of the book is that a small diary, or "codex," is found by Justine, the main protagonist, while she is in a cave under a church and an earthquake occurs. The codex turns out to be the diary of Mary, mother of Jesus. However, it mentions that Jesus had a twin sister who died in infancy, and that Mary was not a virgin, but had had intercourse with Joseph several times before conceiving Jesus. Will this "codex" be made public? Will it upset Christians, Muslims, Essenes, and will it cause instability in Egypt and possibly the world? This was a good story line for the book, and the way the author chose to deal with the information was interesting to a point. The point where I lost interest is when the codex is stolen, apparently with the blessings of all these different religious leaders, because they don't want this anti-Biblical information made public.

One of the real problems I had with the book was that not much really happened for very long stretches of time. We find Justine involved in many philosophical conversations with friends, co-workers, and herself. While the inclusion of historical facts was interesting, they sometimes seemed to take away from the plot of the book simply because there were so many of them to read which were not relevant to the story.

S.Markel
5,0 de 5 estrelas A great tale with authenticity
Avaliado nos Estados Unidos em 13 de outubro de 2013
Compra verificada
Such an intriguing story about a young woman who becomes an anthropologist and returns to Cairo to work with a grant funded foundation for education girls. Monumental challenges and nuances of the Muslim world provide a context for an incredible story about a codex that dropped out of a crack in a wall during an earthquake. The story takes off from there in a rush. Lambert weaves a believable tale about the complexity of 3 major religions who may not willingly accommodate new foundational information and the difficulty for the main character to determine who is a good guy or a bad guy. This is a terrific read. I'm looking forward to the sequel.
Ler mais
2 pessoas acharam isso útil
Informar abuso
Traduzir avaliação para Português

Annie F
5,0 de 5 estrelas 5 stars for The Cairo Codex
Avaliado nos Estados Unidos em 30 de outubro de 2014
Compra verificada
Interesting archeological/anthropological mystery. Good character development, a page-turning plot! I read the ebook purchased through Amazon and will be purchasing Lambert's next book in The Justine Triology! My only complaint is with the electronic formatting at the beginning of each chapter which significantly interfered with Amazon's text-to-speech program. This formatting error made it necessary to restart the text-to-speech pgm EVERY chapter (& this book had a lot of chapters!) I have read over 120 e-books using Amazon's amazing text-to-speech program, this is the first time I've encountered this problem. Regardless, I truly enjoyed The Cairo Codex & highly recommend this author!
Ler mais
Informar abuso
Traduzir avaliação para Português

PW
4,0 de 5 estrelas Egypt Book Interesting
Avaliado nos Estados Unidos em 17 de março de 2014
Compra verificada
The theme of this book as related to history and women in Egypt was interesting and written by someone who had spent time there. The information on religion and history was informative, and the description of sites and Cairo was fairly authentic. However, the book would have benefited from more editing. Many aspects of the plot seemed contrived, and maybe existed as framework for the multitude of history and facts presented. I liked the book and it recalled things we had seen in Egypt.
Ler mais
Informar abuso
Traduzir avaliação para Português
Visualizar todas as avaliações
Voltar ao início
Conheça-nos
Ganhe dinheiro conosco
Deixe-nos ajudar você
Pagamento
E não se esqueça:
© 2021-2022 Amazon.com, Inc. ou suas afiliadas