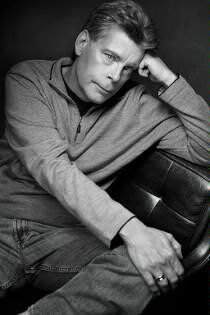 Stephen King is the author of more than fifty books, all of them worldwide bestsellers. Among his most recent are Under the Dome, Just After Sunset, the Dark Tower novels, Cell, From a Buick 8, Everything's Eventual, Hearts in Atlantis, The Girl Who Loved Tom Gordon, Lisey's Story and Bag of Bones. His acclaimed nonfiction book, On Writing, is also a bestseller. He was the recipient of the 2003 National Book Foundation Medal for Distinguished Contribution to American Letters. He lives in Maine with his wife, novelist Tabitha King.

Curly
4,0 de 5 estrelas What a debut
Avaliado no Reino Unido em 30 de setembro de 2018
Compra verificada
Carrie is the story of Carrie White,a ridiculed and bullied girl who in time discovers she has a secret power,a power she uses to devastating effect in a pulsating finale.

I'm a massive fan of Stephen King,pretty much read all his books,am in the process of 're-reading them all in order.

This his first novel is a great read,love the way he incorporates graffiti,manuscripts and interviews into the story,you can't help but feel so sorry for Carrie as that is Kings strength,his character building,I've had people tell me they can't get on with Kings books because there is too much character building,which is insane as you wouldn't get anything out of the books if you didn't have a vested interest in the characters,nobody does it better than King in my book.

So I highly recommend this book,read this and you will want to read everything else he has written.

LJBentley
2,0 de 5 estrelas Underwhelming
Avaliado no Reino Unido em 3 de março de 2019
Compra verificada
Ok. So this is probably going to be an unpopular opinion because I know that Stephen King is the master of horror and a genius at his craft but I just didn’t rate Carrie. I think the problem is that I was expecting to be absolutely petrified and I just wasn’t. I was a little bit underwhelmed if truth be told. This may have been due to many reasons; those being: I am of a generation that has seen so many real life horrors that it will take something pretty massive to scare me or because of Stephen King’s legendary status I was just expecting more.

One thing I will say about Carrie is that it really does excel in showing the cruelty of school kids. That is something that he definitely got right.

I plan to read more of King’s novels to see if this was just a one off.

Alyssia Cooke
4,0 de 5 estrelas King's debut novel
Avaliado no Reino Unido em 31 de outubro de 2019
Compra verificada
It's certainly taken me long enough to get around to this and before starting it I hadn't realised that it was King's debut novel. On reading it, you can tell. It is still very well written and immersive but it doesn't have quite the polish of King's later works. Somehow the rough around the edges approach works here though, perhaps because the novel has a selection of different styles worked throughout it; you get newspaper reports, interviews, expert book excepts along with the more standard storytelling approach seen from character perspectives. It's an interesting approach that flips between the present and the future, and ensures that you are more than aware that something pretty darn awful is going to occur before anything really occurs.

I found the shifting mediums and perspectives clever rather than jarring, although others may disagree. What I found most jarring was King's depiction of menstruation; never in my entire life have I heard of a female gushing blood from that area unless it's actually a medical emergency or a miscarriage. I understand that the scene was meant to stand out but I do wonder if King actually spoke with any females before writing it. That said, I found the novel as a whole brought the tension levels up well and addressed topics like bullying and religious indoctrination well. The academic texts throughout bring a layer of realism to the novel and it certainly drew me in.

Helen Simpson
4,0 de 5 estrelas You reap what you sow!!
Avaliado no Reino Unido em 17 de fevereiro de 2021
Compra verificada
I saw the film years ago in my teens and for that reason didn't pick up the book...until now.
It was shorter than I expected (having read many of King's other books) and whilst good, I can tell it was an early book.
Written from varying points of view during the build up, after and during the events of 'prom night'. King uses eye witnesses and media articles to tell the story of Carrie, a girl from an abusive background who has telekinetic powers and who is cruelly bullied by her peers at high school.

It's unputdownable from the beginning. I find it ironic that Stephen King screwed his first chapter up and binned it (to be rescued by his wife) thinking it no good when in actual fact he had combined some of the most traumatic events that could happen to a teenage girl.
The absolute horror of having to be naked in a communal shower with a group of your peers who you know hate you; the even worse horror of starting your first period in front of said peers...never mind not even knowing what a period is!!

Mrs White's death is more violent in the original film version and whilst that would also have worked in the book, I feel Carrie still loved her mother however appalling she was (I cringed every time the expression 'dirty pillows' was used) and it seemed more in character that she provided a quieter, more controlled death for her.
Ler mais
Informar abuso
Traduzir avaliação para Português

Simon Edwards
5,0 de 5 estrelas This is where it all began
Avaliado no Reino Unido em 28 de junho de 2013
Compra verificada
It was like love at first sight when I first picked up this novel at the age of thirteen, loving the front cover of a girl with blood dripping down her face. I was attracted to it immediately and it would be a love affair that has lasted fifteen years.

I had just lost my dad and was completely depressed. Within the first few lines of this debut novel by my all-time favourite write Stephen King, I immediately forgot all my troubles and concerns and was engrossed within the story of the "ugly duckling girl" that was tormented by her peers, tortured emotionally and physically by her religiously demented mother and had a rare gift - the gift of telekinesis - that allowed her to move objects with her mind. I felt sorry for Carrie and suddenly started wishing that I had a gift like this, but the genius of King is the way he is able to twist this wonderful rare talent into the ultimate nightmare.

Carrie is a simple story of how a girl who has no friends, suddenly discovers the idea of women growing up and discovering her first period, a trauma for her brought on by the fact that she believes she is dying, as well as the fact that her peers believe this is just a funny joke that they can use to abuse Carrie with. This is the catalyst that starts the whole horror of what the novel Carrie really is. Through the use of false interviews and made-up articles written by King himself, the reader learns the true horror of what this girl possesses and what she has to go through to get to the point of prom night where she will use her power to enact vengeance on those that have tortured her.

The real horror is more so for the reader who is drawn into the entire drama, waiting to see what happens, wondering just where the horror will end - the way in which Carrie is treated both by her peers and her mother, and what she is forced to endure is probably more horrific than the way in which she enforces her power on the towns-people.

Carrie, the book, has often been criticised by a lot of readers as being very raw and only showing the tip of the ice berg towards King's talent. Yes, this is a debut novel and King is still finding his way through his talent, but the rawness and naivetés is what makes this one of King's most popular and enduring novels that bounds the reader under some sort of spell in which they cannot put the book down. I have read this numerous times and I never get tired of it. It shows King as a great story teller who really knows how to engage his audience and make them want to come back for more.

I first read Carrie fifteen years ago and I have never looked back since. Over the years I've discovered new books by King and discovered his talent doesn't dim but grows and he is one of those rare writers where if you were to read the same book again, it will become better for you rather than tedious. I do not consider Carrie to be the best of his novels - how could it be with all those other works of genius he has written, but it is one of my favourite and most treasured as it was the first of his novels that I read; I read it when I was going through the worst period of my life and it got me through some really bad times. It is a fantastic story with a great heart, a well written tale of sweet revenge and consequence. It is one of those books that a lot of people can identify with as it gives a clear understanding of what school is really like, both for the victim and the bully. I cannot rave about this novel enough. It is a truly wonderful book and if you haven't read Stephen King before, this is a good place to start. If you have read him before, you are in for a treat and will not be disappointed - if you have read this novel before, read it again. It's just as good, if not better, the second time. It's the debut of one of the most talented writers who has ever put pen to paper. It made me become a fan!
Ler mais
21 pessoas acharam isso útil
Informar abuso
Traduzir avaliação para Português
Visualizar todas as avaliações
Voltar ao início
Conheça-nos
Ganhe dinheiro conosco
Deixe-nos ajudá-lo
Pagamento
E não se esqueça:
© 2012-2021, Amazon.com, Inc. ou suas afiliadas