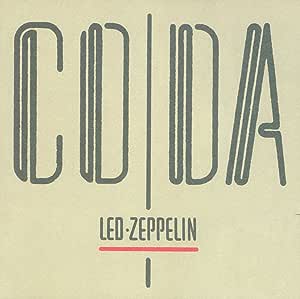 Presence, in through the out door, and coda have been remastered for 2015 by guitarist and producer jimmy page and are accompanied by companion audio comprised of previously unreleased music related to the release. The appropriately titled coda was led zeppelin s final album of studio recordings. Released in 1982, it was comprised of eight unreleased tracks recorded between 1970 and 1978. It peaked at 6 on the album charts and has been certified platinum in the u. S. The reissue campaign ends with a double-barrel blast of led. Coda will be the only led zeppelin deluxe edition to include two companion discs, featuring 15 tracks recorded between 1968 and 1974. The oldest song in the collection is also perhaps the most interesting. The frenetic blues jam sugar mama was recorded in 1968 at olympic studios during sessions for the band s eponymous debut. The song was completed but never officially released until now. Baby come on home from the same session is also included in the set. Also included is the previously unreleased st. Tristan s sword, a rollicking instrumental recorded during the led zeppelin iii sessions in 1970. Coda is available in the following formats: single cd remastered album. Coda will be packaged in a gatefold card wallet. Deluxe edition (3cd) remastered album, plus two discs of unreleased companion audio. Single lp remastered album on 180-gram vinyl, packaged in a sleeve that replicates the lp s first pressing in exacting detail. Deluxe edition vinyl remastered album and unreleased companion audio on 2 180-gram vinyl lps. Digital download remastered album and companion audio will both be available. Super deluxe boxed set this collection includes remastered album on cd in vinyl replica sleeve, companion audio on cd in card wallet, remastered album on 180-gram vinyl in a sleeve replicating first pressing, companion audio on 180-gram vinyl, high-def audio download card of all content at 96khz/24 bit, hard bound, 72+ page book filled with rare and previously unseen photos and memorabilia, high quality print of the album cover, the first 30, 000 of which will be individually numbered.

The Punk Panther
5,0 de 5 estrelas We're gonna groove....
Avaliado no Reino Unido em 16 de novembro de 2019
Compra verificada
Coda was a retrospective compilation of rarities released two years after Led Zeppelin's split in 1980 after drummer John Bonham's death. The best version of it is the latest one, which features several more bonus tracks than the original album did.

BONUS TRACKS (not on original album)

There are also "alternative mixes" of If It Keeps On Raining (When The Levee Breaks); Four Hands (Four Sticks); Desire (The Wanton Song) and Everybody Makes It Through (In The Light).

We're Gonna Groove is an upbeat, vaguely funky piece of late sixties blues rock. It is full of great guitar, drums and vocals. It would have been a fine addition to either of their first two albums. There is confusion over the origin of the song. Many believe it is a stdio recorded outtake from 1969, others believe it is a live recording from January 1970. It sounds like a studio recording to me, although it apparently had some studio guitar overdubs added by Jimmy Page at some point when compiling this album.

Poor Tom is a marvellous bit of lively blues rock, powered along by John Bonham's sledgehammer drumming. It has similarities to The Rolling Stones' Prodigal Son from Beggars' Banquet, which was in turn based on Reverend Robert Wilkins' 1929 song, That's No Way To Get Along. It sounds great, though, and would have sat well on side one of Led Zeppelin III from whose sessions it was taken.

A storming live version of I Can't Quit You Baby from Led Zeppelin I would appear to be from an actual concert at The Royal Albert Hall in 1970, although it was credited as being a pre-gig rehearsal. There is no crowd noise either way.

Walter's Walk is a solid, muscular rocker from the Houses Of The Holy sessions. it is arguably superior to some of the tracks that ended up on that somewhat patchy album. Once more, Bonham's drums are outstanding.

The old "side two" contained three outtakes from In Through The Out Door. Ozone Baby is an infectious little rocker, all guitar, drums and bass and, notably, none of the synthesisers or piano that dominated the album that it failed to make the cut for. It is one of my favourites on here, with a catchy "ooh-ooh it's my love" chorus.

Darlene fitted in with some of the rock 'n' roll-influenced material that did appear on the eventual album in 1979. John Paul Jones' boogie piano is integral and there is a bit of a Rolling Stones circa 1972 about it. There are also hints of Queen in places near the end, vaguely like Crazy Little Thing Called Love in its vibe and vocal.

Bonzo's Montreux was a sledgehammer drum solo from Bonham, dating from 1976, when he lived in Montreux, Switzerland, as a tax exile. It is the album's tribute to him.

Wearing And Tearing was, apparently, Zeppelin's answer to punk, in its breakneck, riffy style. It doesn't sound remotely punky to me, it just sounds like Zeppelin rocking in their own inimitable fashion. I loved punk, but I loved Zeppelin too. The two were different beasts, they didn't need to meet.

From the bonus tracks, Baby Come On Home is a slow, slightly rock 'n' roll ballad meets rock number, with a loose, soulful bluesiness to it. It features some Atlantic Records-style gospelly organ too.

Travelling Roadside Blues is an impressive piece of slide guitar-driven blues rock, taken from a 1969 BBC live in the studio session. It includes the "Squeeze my lemon 'til the juice runs right down my leg" lyric used also on Led Zeppelin II's The Lemon Song. It is also included on the live album Led Zeppelin At The BBC. In my opinion, it is remastered better here on Coda - fuller and bassier. The version of the instrumental White Summer/Black Mountain Side was recorded in London in June 1969. This also appears on the BBC album.

Hey Hey What Can I Do is an appealing piece of folky rock, typical of Zeppelin's 1970 output. Sugar Mama is a cover of a Sonny Boy Williamson song dating from sessions in 1968. It is riffy and lively, with a high-pitched Robert plant vocal. Bonham's drums are engagingly rhythmic on this, despite their ubiquitous thumping power.

St. Tristan's Sword was a Led Zeppelin III outtake. It is a rocking instrumental that would again have suited side one of that album. Also interesting is the Bombay Mix of Four Sticks called Four Hands, which has an instrumental version of the track played by Indian musicians, Zeppelin going full-on George Harrison. They do the same to Friends. This one includes a Plant vocal. If It Keeps On Raining (When The Levee Breaks) is bassily addictive too, although this one is a Zeppelin mix, involving no Indian musicians.

Overall, there is some very good stuff on here, not as much as many never-satisfied fans wanted, perhaps, but it is fine by me.

Mark A
3,0 de 5 estrelas EXTRAS, YES...BUT STILL THE RUNT OF THE LED ZEP LITTER
Avaliado no Reino Unido em 14 de fevereiro de 2016
Compra verificada
Yes, let's start with the obvious. The original Coda was a massive let down compared to Led Zep's former glories. All the best outtakes/'didn't quite make the cut' tracks were plundered for Physical Graffiti anyway, so by the time we get to Coda, we are close to the bottom of that barrel. So what about the Extras of which I'd heard some good things in other reviews. I can't say any one track is outstanding. Yes, the work-in-progress takes of In The Light and When the Levee Breaks are good alternate versions, but not a patch on the final incarnations. Hey Hey What Can I Do has always been a nice throwaway song, but too much of the rest is distinctly average. I'd been suckered in on the fact this re-issue has 2 extra CDs compared to the previous albums....only buy this if you want the complete set of re-issues
Ler mais
11 pessoas acharam isso útil
Informar abuso
Traduzir avaliação para Português

awollin
3,0 de 5 estrelas Not best release/re issue/pressing.
Avaliado no Reino Unido em 26 de maio de 2020
Compra verificada
Something not quite right with this press. Sound of Plant's vocals just sounds muffled and out of place. Maybe it's my ear but its sounds missplaced. All in all it's a great album and is an enjoyable listen if you like Heavy Zepplin.
Ler mais
Informar abuso
Traduzir avaliação para Português