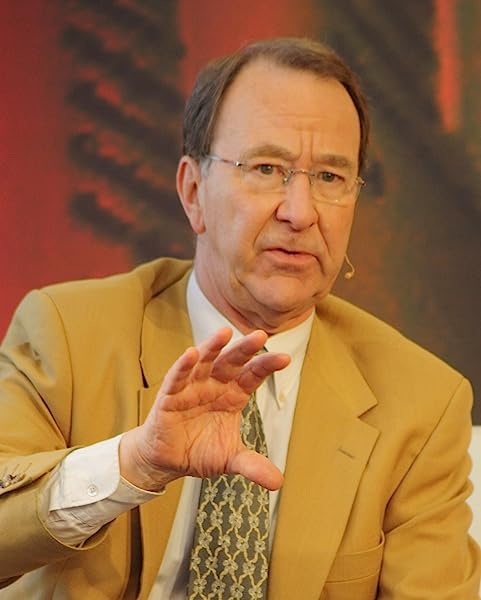 Ian Kershaw is a professor of modern history at the University of Sheffield and the author of numerous works of history, including Hitler: A Biography, Fateful Choices and Hitler, the Germans, and the Final Solution. He lives in Manchester, England.

Mr. James E. Parrott
5,0 de 5 estrelas Hitler 1936-45 Nemesis by Ian kershaw
Avaliado no Reino Unido em 2 de maio de 2014
Compra verificada
Ian Kershaw is one of my favourite WW2 authors, and I have enjoyed all of his books immensely. But this book is in my opinion is his very best piece of work, also it is my favourite WW2 book by any author, and I have read scores of them. The book showed not only the dark side of Hitler and the influence that dark side had upon the world. But it offered an insight into the why's and how's of his thinking. Not only did it focus on Hitler, but also on those around him, the pressures he put them under, the rewards he offered and punishment for failure. It describes his mentality and showed how that mentality effected politics,everyday lives, battles and military thinking.
This book I cannot recommend enough, if there was a ten star rating that would perhaps be enough.

conjunction
4,0 de 5 estrelas The Drama is Unremitting to the End
Avaliado no Reino Unido em 18 de junho de 2014
Compra verificada
What I found most interesting in this second volume was how as a military leader, Hitler's instincts were nearly always wrong, once the tide began to turn against him as it did at Stalingrad.

He was incapable of surrender and fundamentally believed, so he said, that the cause, in success or failure, was more important than saving lives, or any survival of the Reich based on any form of compromise.

With the possible exception of Goebbels, nearly all his followers wanted to try and strike a deal before the Reich sank into the marshes, but Hitler would not budge an inch, and didn't totally give up hope of a change of fortune until hours before his bunker suicide, with Russian shells dropping in the garden above.

The character of his main lieutenants, notably Goring, Goebbels, Bormann and Speer emerge clearly from this volume.

As I said in my review of the first volume, this is not a history of the Third Reich but a biography of Hitler and as such many details of the war are absent.

Kershaw's style is a little heavyhanded. He refers to his sources only by numbers of notes at the rear, so in a literary sense everything is presented without much evidence. The evidence is there of course, I am not doubting his scholarship, but it isn't the most engaging read.

This is compensated for however by the drama of the story he has to tell. There is plenty to say about the plight of the German people and their gradually changing mood and attitude to Hitler.

P I
5,0 de 5 estrelas The best biography I have ever read he describes in detail ...
Avaliado no Reino Unido em 22 de maio de 2015
Compra verificada
The best biography I have ever read he describes in detail the twisted mind of the biggest monster of the 20th century. In Nemesis h e describes how Hitler's evil but magnetic personality slavishly dragged the German people into a war of annihilation with the whole of Europe. He describes how Hitler used the fear the France and Britain of been dragged into another world war and used it to get his hand on the Sudentland. He also describes in great detail on how facing complete defeat Hitler lost attachment with the reality around and kept Germany on the fast track to ruin. I would recommend this book to any body interested in 20th century history.
Ler mais
1 pessoa achou isso útil
Útil
Enviando feedback...
Agradecemos seu comentário.
Desculpe, o registro do seu voto falhou. Tente novamente
Informar abuso
Traduzir avaliação para Português

Brian
5,0 de 5 estrelas great insights
Avaliado no Reino Unido em 16 de setembro de 2018
Compra verificada
Having been lent volume 1 I was fascinated to see the next chapter. As a history buff I have been into WW1 &2 and to see some more detail into the lives and thoughts of this regime has been eye opening. I was hooked on this book right from word one and couldn't put it down. Looking forward to starting the next book.
Ler mais
Útil
Enviando feedback...
Agradecemos seu comentário.
Desculpe, o registro do seu voto falhou. Tente novamente
Informar abuso
Traduzir avaliação para Português

Eugene Lafcadio
5,0 de 5 estrelas Inside the mind of evil.
Avaliado no Reino Unido em 19 de dezembro de 2015
Compra verificada
There are few people more knowledgeable, and, just importantly, more readable on the subject of Hitler and the Nazis than Ian Kershaw. I have read both his books previously as library books, but with a grandson with an interest in studying history, I felt I had to have these two excellent books. As well as deep analysis of this vile man, Kershaw also destroys many Hitler myths.
This, and the other tome on the subject, are, IMO, required reading for anyone studying, or merely interested in 20th Century history.
Ler mais
Útil
Enviando feedback...
Agradecemos seu comentário.
Desculpe, o registro do seu voto falhou. Tente novamente
Informar abuso
Traduzir avaliação para Português
Carregar mais avaliações internacionais

Mr. M. Herbert
5,0 de 5 estrelas Kershaw does it again.
Avaliado no Reino Unido em 9 de janeiro de 2014
Compra verificada
What an author. Superb book, extremely well researched, as you would expect from Kershaw. This book is more than just another overview of Adolf and his mottley bunch. Kershaw takes the reader across the Nazi term in office at a god pace, yet missing nothing of importance. As always, his accounts of Hitler's thought processes, the cruelty and sheer follies of Nazism are fully exposed for what they are. The Allied response to the expansion of Germany is also well set out. As a student of Soviet Russia, I found this book far more than a "duplication" of Kershaw's other mighty works on Hitler. A very good additional, authoritative read indeed.
Ler mais
1 pessoa achou isso útil
Útil
Enviando feedback...
Agradecemos seu comentário.
Desculpe, o registro do seu voto falhou. Tente novamente
Informar abuso
Traduzir avaliação para Português

Martin
5,0 de 5 estrelas A must read for anyone studying or interested in the man and the second WW.
Avaliado no Reino Unido em 23 de junho de 2018
Compra verificada
A superb book by one of THE recognised experts of Hilter and that era. Referenced all the way through.
Of all the books written about Hiltler I'd would be difficult to imagine a more comprehensive one.
Ler mais
Útil
Enviando feedback...
Agradecemos seu comentário.
Desculpe, o registro do seu voto falhou. Tente novamente
Informar abuso
Traduzir avaliação para Português

charlie k
5,0 de 5 estrelas History like it should be told
Avaliado no Reino Unido em 12 de março de 2015
Compra verificada
I read Nemesis first and I was amazed. A good novel can do that but a history book? Maybe it's because of the way history is taught at school although I loved history at school. Hubris is every bit as good as Nemesis. There's 800 odd pages in each but so what? These books have won awards and praise in Germany; that's testament to the author
Ler mais
1 pessoa achou isso útil
Útil
Enviando feedback...
Agradecemos seu comentário.
Desculpe, o registro do seu voto falhou. Tente novamente
Informar abuso
Traduzir avaliação para Português
Carregar mais avaliações internacionais

David Roy 10
4,0 de 5 estrelas Great book, but Kindle edition full of typographical errors
Avaliado no Reino Unido em 12 de julho de 2015
Compra verificada
This book is well written and, unlike other biographies of Hitler, explains the reasons for the invasion of the USSR and why for economic reasons war was inevitable. Unfortunately the Kindle edition has been appallingly transcribed, e.g. "Haider" for "Halder" is very common, and annoying. If customers are paying for a book, an unchecked OCR is not good enough.
Ler mais
Útil
Enviando feedback...
Agradecemos seu comentário.
Desculpe, o registro do seu voto falhou. Tente novamente
Informar abuso
Traduzir avaliação para Português

Risteard Mac An Bhearshuiligh
5,0 de 5 estrelas The Definitive Work on Hitler
Avaliado no Reino Unido em 12 de maio de 2013
Compra verificada
It is hard to fault this. I have a number of works on Hitler (including Mein Kampf), and this deeply researched and unbiased account nevertheless reveals a man who appears to have been more evil than any of the previous works have suggested. I doubt I will buy another book on Hitler ever again, so complete is this one.
Ler mais
1 pessoa achou isso útil
Útil
Enviando feedback...
Agradecemos seu comentário.
Desculpe, o registro do seu voto falhou. Tente novamente
Informar abuso
Traduzir avaliação para Português