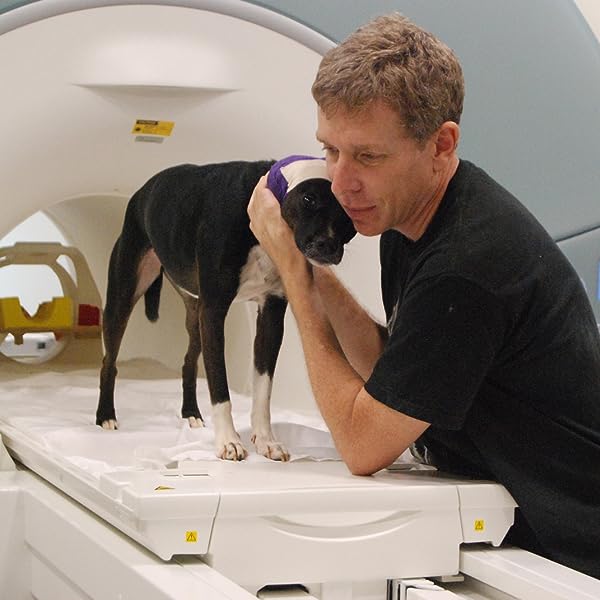 How Dogs Love Us: A Neuroscientist and His Adopted Dog Decode the Canine Brain Capa dura – 22 outubro 2013

GREGORY BERNS, M.D., Ph.D., is the Distinguished Professor of Neuroeconomics at Emory University. Dr. Berns's research is frequently the subject of popular media coverage, including articles in the New York Times and the Wall Street Journal.

Freya Locke
5,0 de 5 estrelas Fascinating, warm and funny
Avaliado no Reino Unido em 8 de abril de 2018
Compra verificada
Berns talks us through some very complicated science, in a way that we understand it so well we could be reading about him making a sandwich. The experiments he did on the dogs were not only ground breaking for the science, but also in the way the animals were not treated as laboratory commodities, but kindly and with dignity, and so they participated willingly. The science involved has opened up a whole can of worms, which will be fascinating to watch as it plays out in the future.
A fantastic read.

Chloe's Mum
5,0 de 5 estrelas Humans trying to understand dogs trying to understand humans
Avaliado no Reino Unido em 24 de outubro de 2014
Compra verificada
Anyone who lives with a dog should read this interesting and engaging account of how an off-the-wall research project was incepted, progressed and conducted: scanning the brains of fully conscious dogs to map how responses in specific areas of the dogs’ brains are triggered by actions of the owners. Every obstacle and difficulty is foreseen and overcome to safeguard the comfort and well-being of the subjects at all times, while ensuring the integrity of the data collected from the scans. The author’s own academic and emotional journey through this process is accounted honestly revealing the love and respect he feels for dogs, and how his understanding of and empathy with them evolved and grew throughout the project. Like most pioneering research, this account raises more questions than answers and provides much food for thought about conventional dog training methods.
Ler mais
3 pessoas acharam isso útil
Informar abuso
Traduzir avaliação para Português

Lady Justine
5,0 de 5 estrelas A wonderful narrative account of the science behind how dogs see us
Avaliado no Reino Unido em 20 de novembro de 2016
Compra verificada
I loved the narrative format which was easy to read and non-sciencey, with an appropriately sciencey list of books and articles at the end if you want the science. I found myself absolutely weeping at the end for this species who give us so much, who demand so little and are our constant companions. I look forward to more neuroscientists choosing to consider the brains of our closest companions and finding out more about the dogs we have in our lives.
Ler mais
3 pessoas acharam isso útil
Informar abuso
Traduzir avaliação para Português

FirstLord
5,0 de 5 estrelas Is Your Dog Watching?
Avaliado no Reino Unido em 19 de dezembro de 2015
Compra verificada
At first glance this book was an odd subject to write about. But as I read on I became more and more interested in learning about how the dogs responded to what Gregory Burns asked them to do. There is so much interesting science in the book as well as the insights Gregory Burns notices with the dogs as the project develops. I have a dog and since reading this book I have paid more attention to the way my dog reacts when he is trying to tell me something. I would recommend this book to all dog lovers everywhere.
Ler mais
3 pessoas acharam isso útil
Informar abuso
Traduzir avaliação para Português

Moz33
3,0 de 5 estrelas How do our dogs love us??
Avaliado no Reino Unido em 16 de abril de 2015
Compra verificada
There are some really good, scientifically based insights in this book but I think the title promises more than it delivers. It's actually a bit dry in patches and goes into a lot of detail about the experiments and the discussions which pre-empted them but I'm not really sure that, after reading it, I am any further enlightened as to 'how our dogs love us" nor indeed (what I suspect most people really want to know) how we can definitvely tell "if" our dogs love us.
Ler mais
1 pessoa achou isso útil
Informar abuso
Traduzir avaliação para Português
Visualizar todas as avaliações
Voltar ao início
Conheça-nos
Ganhe dinheiro conosco
Deixe-nos ajudá-lo
Pagamento
E não se esqueça:
© 2012-2021, Amazon.com, Inc. ou suas afiliadas