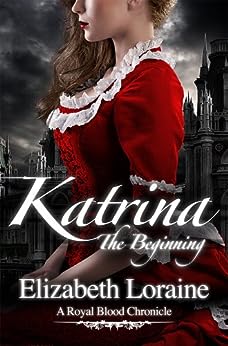 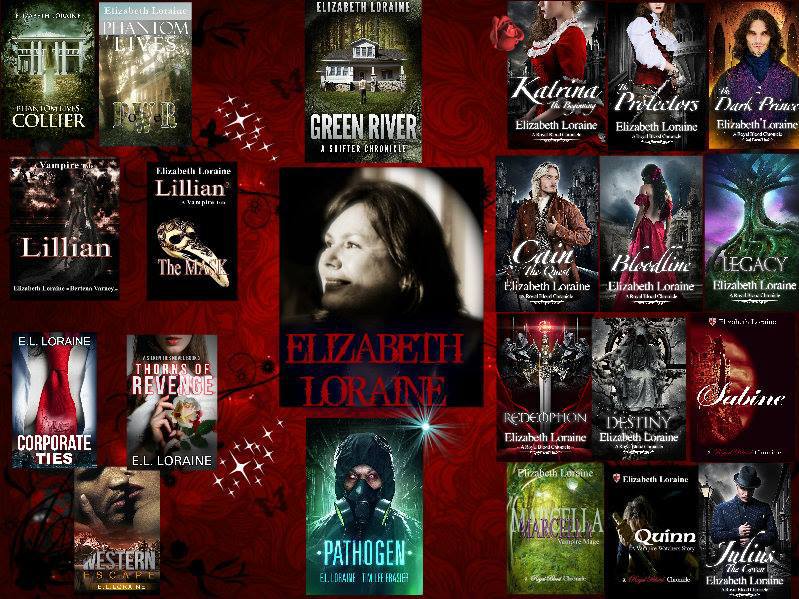 Looking for your next YA Series? You've just found it!

As a Vampire being hunted was nothing new. Finding out that I had to save those that were hunting us was!

Katrina is thrust into something she never could have imagined growing up in the aristocracy of Europe. Once the fashion of the day, and girlish gossip filled Katrina and her new friends days, but their lives changed the instant their race was threatened and they were chosen as the Five, and the protectors of not only the vampire race, but all the peaceful races of the world!

Katrina, the Beginning book one, chronicles the story of Katrina from the age of seventeen in the series - Royal Blood Chronicles - it's full of romance, friendship, adventure and betrayal in a fast paced, fun read. It's filled with strong female characters in a lush, beautifully drawn fantasy world built and wonderfully written by Elizabeth Loriane

˃˃˃ I am a fan of YA novels. I am also a fan of vampire novels. Between my two loves, I had thought I had experienced the majority of what the genre could provide me, until I discovered independent author, Elizabeth Loraine!

˃˃˃ Elizabeth Loraine has captured the young adult vampire world in a new and refreshing way and I would thoroughly recommend this series to anyone for a brief respite from the real world of today.

˃˃˃ John Daniels, author and publisher writes: "This is a page-turning, swashbuckling adventure told by a gorgeous seventeen year old vampire on the verge of womanhood. Katrina and her companions are girls who love fancy clothes and romantic gossip; but when their race is threatened, they become Women Warriors, using their paranormal talents, lightning speed, and razor sharp blades to wreak deadly justice. By turns tense and funny, this is a great read for fans of bloodlust."

Scroll up and grab a copy today.

shazza
5,0 de 5 estrelas katrina the beginning
Avaliado no Reino Unido em 26 de maio de 2012
Compra verificada
i purchased this purely due to the price, i do not usually read historic novels as i find it hard to connect with historical characters. However i`m glad i took a chance with this book, it is one of rare finds that when you are reading you can visualise at the same time.i won`t give away the story as i feel you need to take this journey and it is a journey with ups and downs plenty of tears and moments when you cant bare to look, but are compelled to do so.The journey does not end on the final page, i downloaded the sequels and continued the journey over two days[well i did have to work as well]i have enjoyed these for various reasons but the main being that it is a good read.Go on take the plunge if its not your usual read i`m sure you will enjoy them.
Ler mais
1 pessoa achou isso útil
Informar abuso
Traduzir avaliação para Português

Karebear
4,0 de 5 estrelas Wonderful Coming of Age Vampire Saga
Avaliado nos Estados Unidos em 1 de agosto de 2011
Compra verificada
Follow Katrina in this beginning tale of the Royal Blood Chronicle series. Katrina, the Beginning is told in the point of view of a young seventeen year old vampire named Katrina. The story takes place in the 1800s and although the Royals have their own servants that tend to their beck and call, the characters are still very compassionate and unselfish towards their staff and watchers. Of course, Katrina would never ever consider them staff but rather family. She discovers new friendships that are more important than she would ever have imagined. Katrina is a strong protagonist and is very easy to love. Hmm It seems like every male character becomes infatuated with her with in the small time of meeting her. She faces first time romance, enemies, and never ending adventure. Katrina realizes that she has a purpose and must learn to strengthen her gifts with her new companions.
I have to admit that I have been trying to finish this first review of the first book for over a week now. I have been writing a little.. saving... and then returning to write a lil' more. Why? Well, the honest truth is that I have loved this series so much that I have been unable to put the continuing books of this series. However, I have been trying very hard to review the book as soon as I finish it but Elizabeth Loraine has done a wonderful job at ending each book in a manner that makes you dive into the next book with the wonder at what will possibly happen next.
This is my first series that I have read of Elizabeth Loraine's books. I was very impressed with her story telling. I really enjoyed the fact that Katrina, The Beginning took place in the 1800s. It was nice to experience the mannerisms, fashion attire, and social events that the Royals are able to take part in. I also enjoyed the many characters that Ms. Loraine has included in this story. I love the two love interests Quinn and Damien. Hmm ......which should she choose? The handsome human watcher that has been her best friend since they were babies or the mysterious Royal Vampire Damien who is also very interested in Katrina. Poor Katrina! Which we all had that dilemma.
I n the beginning I felt that she fell in love to easily with the love interest but it actually makes a lot sense when you continue to read the books. So, do not give up! They continue to get very interesting and page turning. I must say that I have never read a book that talked about bath taking as much as Katrina does and enjoys. Hmm It does make me wish I had a Sara that would draw my warm bath with nice soothing fragrances and be there to brush my hair. Sounds relaxing.
I also love the many training exercises and battles that Katrina partakes in. Boy, Katrina may look sweet and innocent but I definitely would not mess with her. I would hate to be her enemy because she is definitely a warrior with her weapons and Vampire speed.
If you have not yet began this book series . I highly recommend Katrina, The Beginning be on your must read book shelf. Trust me! I have read many books. You will not put this book down anytime soon.
Karen
Ler mais
20 pessoas acharam isso útil
Informar abuso
Traduzir avaliação para Português

I am always on the hunt for a new series, particularly one that is on-going and has lots of characters I can attach myself to. Such a series was precisely my hope when I downloaded Elizabeth Loraine’s Katrina: The Beginning. Though I made it through cover to cover, I found this first-in-a-series read to be somewhat lacking.

*The Watcher’s: Each member of a vampire family has a Watcher, an individual human trained since birth to protect and train the vampire he is assigned to. The Voss family, a herd of beautiful and well-trained brothers have been with the von Dracek vampires for generations and each has become like family to the other.

*The Families: From the beginning, the reader understands that there are a multitude a vampire families spread out across the world. The families are wealthy and aristocratic and work hard to keep their very nature secret from the humans they live among. As with any powerful group, there are alliances and enemies to be found and those relationships are intriguing.

*The Five: The five vampire daughters who are the next generation of their respective families. These girls are beautiful, well-educated and extremely powerful. When the group comes together, their power is enhanced exponentially and it is a wonder to behold. What those girls will be able to accomplish once their powers are fully explored and mastered is going to be unbelievable.

*The Twists and Turns: Every time I thought I was settling into the plot and had a handle on what was happening, yet another twist or turn was thrown into the mix. While this can sometimes be off-putting in a read, I found it to be quite acceptable in this particular read.

*Katrina: Yep, the main character is the only thing in this read that I didn’t care for but man, did I really, really dislike her. Here’s the list of how and why Katrina pisses me off:
1) Her sweetness: Don’t get me wrong, I don’t mind a nice and/or sweet character but Katrina is just over to top sweet - we’re talking cavity inducing sweetness. When you have the abilities that Katrina has, you can afford to be a little less sweet from time to time.

2) Her insta-acceptance: Katrina has a very nasty habit of accepting nearly every situation she finds herself in with only the bare minimum of questions and/or concerns. Without spoiling the read, I found it very, very difficult to believe that a creature such as Katrina, who has to protect herself and her nature from nearly everyone would just automatically accept the new people and situations thrown at her.

3) Quinn: I love Quinn and his dedication to Katrina and the rest of the von Dracek is absolute. He has been with Katrina for most of his life yet when another boy comes sniffing around, Quinn is set aside almost immediately. Though there is some explanation as to why this happens, the explanation is quite unsatisfactory.

The Bottom Line: For me, this read all comes down to how much Katrina pissed me off versus all the other stuff I truly liked. At this point, it’s about 50/50 and since this is such an extensive series, I am willing to give the next book a try in the hopes that Katrina will either play a lesser role or will become a character I can more easily accept or dare I say, even like. I like the other girls in the group and want to see how their powers develop, I like the Watchers and want to see how the Voss boys make out, I want to see how the mission to the New World plays out and I absolutely want to know who the big bad really is and what the long game is. And so, dear reader, onward and upward I go with the Royal Blood Chronicles.
Ler mais
1 pessoa achou isso útil
Informar abuso
Traduzir avaliação para Português