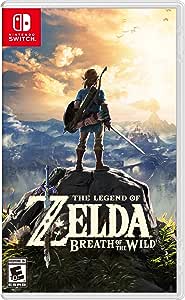 The Legend Of Zelda: Breath Of The Wild - Nintendo Switch-legacy Collection-nintendo_switch

Just another sheep
5,0 de 5 estrelas Good bye social life
Avaliado nos Estados Unidos em 28 de outubro de 2017
Compra verificada
I... have never been so taken aback by the vastness of a game. You really don't need to read another review, Zelda alone is worth the price of a switch. Like if they sold this game for 300 dollars I would probably buy it. In fact, it's the only Switch game I own, and have no real plans to purchase anything else because between the original game and Master Mode, I will be getting a divorce soon so I can spend more time collecting mushrooms and climbing mountains.
Ler mais
1.079 pessoas acharam isso útil
Útil
Enviando feedback...
Agradecemos seu comentário.
Desculpe, o registro do seu voto falhou. Tente novamente
Informar abuso
Traduzir avaliação para Português

alok singh
5,0 de 5 estrelas amazing game
Avaliado na Índia em 18 de outubro de 2018
Compra verificada
my whole family loves this game.a very lengthy quest.we spent a lot of time completing it.about gameplay no need to say anything,internet is full with reviews of this remarkable game..zelda games are the star attraction of nintendo platform.awakens memories of playing zelda on older nintendo systems.must buy if you own a nintendo switch and if you dont own a nintendo switch then purchase the console solely to play this game.games like zelda on nintendo or god of war on ps4 are the main reason that people buy these consoles.
Ler mais

Brett Connolly
4,0 de 5 estrelas Near perfection. Nails so much but still has a few rough edges.
Avaliado nos Estados Unidos em 23 de julho de 2018
Compra verificada
This is how you revitalize a franchise that was starting to grow stale in it's formula. I bought a Switch just to play this game and I do not regret my purchase. I'm going to go over pros and cons to make this review a little easier to read.

PROS:
+ HUGE OPEN WORLD - Lots of interesting places and things to discover. It's quite exhilarating to scale a mountain in order to get a better view of everything around you and then paraglide to points of interest. If you can see a place on the map, you can get to it.
+ COMBAT EXPERIMENTATION - Combat experimentation is fun and rewarding, for awhile (more explanation in 'cons' section).
+ FUN AND VARIED COMBAT (FOR AWHILE) - Different enemy types are interesting and have specific tactics that clearly telegraph their moves making combat a rewarding learning experience and almost never feels cheap.
+ RPG ELEMENTS - The RPG elements fit very nicely into the Zelda universe and give the game a lot of depth. Mountable horses have different stats, enemies can have different elemental types along with stronger variations, weapons, armor, and shields have wildly different stats and abilities, food and elixirs provide different buffs, etc.
+ GAME DIFFICULTY - The game is relatively difficult compared to previous Zelda games. You really have to assess combat situations before entering the fray and many enemies are punishing. You will die, many times, but you do learn, with time, and with learning comes triumph and satisfaction. DLC adds Master Mode for the most hardcore players or those who found Normal too easy.
+ COOKING SYSTEM - Cooking system is deep and rewards experimentation. Cooking not only allows for the crafting of meals and elixirs which gives you numerous buffs, but it's also one of the best ways to make money.
+ WEAPON DURABILITY - Weapon and shield durability forces you to continually hunt for new gear and keeps combat interesting and tense. While I didn't think I would like this system at first, it makes for a much more engaging game than just getting a single, over-powered item and just relying on that the rest of the game, which would get boring, imo.
+ SHRINES - There's over 120 'shrines' which are peppered all over the map which act like mini-dungeons. They usually can be completed in 10 minutes or less and usually involve the use of several of Link's Runes (that you get at the beginning of the game) that give you the ability to move metallic objects from a distance, throw bombs, summon ice pillars, or even freeze objects and apply force to them to launch into enemies or to other places to help solve puzzles. I love these shrines because they're fun to solve, and due to the game's physics engine, many can be solved in ways the developers probably didn't intend (look up YouTube videos on it). Shrines are short enough that they're not a huge time investment like normal Zelda dungeons that used to demand an hour+ of your time to complete, making them ideal for short gaming sessions.
+ NO HAND HOLDING - Doesn't explain much, doesn't hold your hand, and expects you to learn everything from the world, NPCs, and experimentation.

CONS:
- BARREN FEELING OPEN-WORLD - The world feels very barren and empty, much of the time. Many say the map is 'dense' but I don't think that's an accurate word to describe it. The map is loaded with things to do, but there is lots of empty space between those points of interest. Think if you took the map of Skyrim (a game I would call 'dense') and expanded it by 3 times the size, including time to travel between points of interest. Horses don't really help with traversal especially when you're moving across mountainous or rocky terrain.
- COMBAT GETS STALE - Combat experimentation becomes less effective as you become stronger. Ambushes with bombs, chu chu jellies, stasis, etc, all become less and less rewarding as enemies become stronger. Before, a carefully aimed bomb could kill an enemy, outright, or roll into barrels which would take out an entire encampment, now a bomb does roughly 5% damage and most other means are hardly worth the effort over just using brute-force. For a game that really rewarded this kind of behavior at the start, I was bummed that I couldn't rely on those tactics later in the game, adding to the combat feeling stale and repetitive after awhile.
- CAN'T SUMMON HORSES FROM ANYWHERE - Horses cannot be summoned from anywhere. The DLC solves this with 2 different solutions, but it should have been in the base game and been an early quest/reward before you spend 50+ hours exploring the map. This was super frustrating to me when walking to Gerudo town, which ended up being close to 25 minutes of walking/running from the nearest shrine. A horse would have made this trek much more bearable but there were no stables nearby to even take it out of.
- INVENTORY MANAGEMENT AND GENERAL UI - Inventory management and the menu UI could use a little work. While I loved having so many interesting items and ingredients to discover and experiment with, moving through the menus got tedious, especially when you have multiple pages of stuff to sort through or when you find new, better weapons/shields and have to go back into your menus to drop some to make space. Menus felt cluttered and even after 80 hours, I would still fumble through menus trying to do specific things.
- PERFORMANCE AND LOAD TIMES - The game runs pretty well a majority of the time, but there are certain places where it will chug, specifically when there's lots of particle effects on-screen or there's a lot of things to render. This also makes load times get kind of old, as it can take up to 20 seconds to load into new areas or even just reload the area you are in, after dying. Even dying in a shrine results in a 10 second reload, which is baffling since they're not in the open-world and shouldn't take that long to render, especially when they've already been rendered before your death.
- GRAPHICS - While the game looks pretty good most of the time, there's other times that the hardware limitations really show, like when you're trekking across big meadows or rocky mountains with little detail. It looks really good for a handheld system, but doesn't quite hold up to console standards, even compared to last gen.
- EXPLAINS NOTHING - While I love that the game doesn't hold your hand, I was equally frustrated by not having a clue how to do certain things. While a purist would argue that all the answers are SOMEWHERE in the game or that you should just experiment, someone like me just doesn't have the patience to play 90% of the games content to then find out that a certain ability will significantly help map traversal and reduce travel time. I want to know these things up-front or at the latest, halfway through the game, since getting an ability to improve travel time feels less rewarding when I've already slowly trekked through a vast majority of the map at 60 hours. DLC rewards are not as great if you have nearly completed and covered the entire base game... what's the use of a horse or motorcycle you can summon anywhere if you don't have anything left to explore?

Anyways, I absolutely love this game and would like to give it 4.5 stars. I think it deserves better than a 4, but not quite a perfect score of a 5. Given the number of rather large gripes that I had with the game, I felt it important to round down to a 4 instead. I really look forward to the next game but I hope people can acknowledge and admit the game's shortcomings, otherwise, these things won't be fixed in order to give us the most refined and amazing follow-up that we all are already salivating for.
Ler mais
332 pessoas acharam isso útil
Útil
Enviando feedback...
Agradecemos seu comentário.
Desculpe, o registro do seu voto falhou. Tente novamente
Informar abuso
Traduzir avaliação para Português

Shantanu
5,0 de 5 estrelas Still a system seller
Avaliado na Índia em 17 de fevereiro de 2019
Compra verificada
This was the perfect launch title for the Switch. Personally, I would say this title alone is worth getting a Switch for. The amount of care and effort that has gone into this game is very evident from all the fun that you can have.
This game goes back to the roots of the first Zelda on the NES, and lets you loose in a vast open world (after completing a tutorial-like section). A lot of the story is implied, not said out loud. As such there aren't many talking characters but the few cut-scenes are a joy to watch.
The game looks fantastic even in portable mode, and the new art style for this game adds another layer of charm to this game.
This game is slightly challenging however, as the enemies you face always scale up to you and inventory management becomes slightly tedious because of the mechanic in which all shields and weapons will break after some usage.
If you want, you can run straight to the castle with link in his underpants to defeat Ganon with a stick. The game won't stop you, though the fight may convince you about the need to collect better gear from the various enemy creatures first.
Ler mais
9 pessoas acharam isso útil
Útil
Enviando feedback...
Agradecemos seu comentário.
Desculpe, o registro do seu voto falhou. Tente novamente
Informar abuso
Traduzir avaliação para Português

Cerebralazzazzin
5,0 de 5 estrelas Must have <3
Avaliado na Índia em 4 de março de 2019
Compra verificada
If you are Zelda fan or not it doesn't matters, you must have this game, you won't regret.
Ler mais