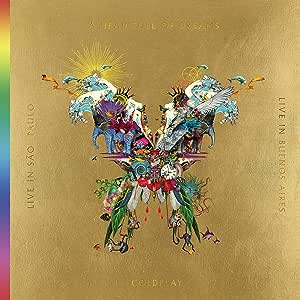 K9
4,0 de 5 estrelas A great insight into one of the world’s biggest bands
Avaliado no Reino Unido em 10 de dezembro de 2018
Compra verificada
It’s been said that Coldplay is like Marmite (you either love or hate them; I wasn’t thinking of the Joan Rivers old joke “it’s like licking a cat’s arse!”). I love them, and have done since first hearing Yellow back in 2000. Personally I find Chris Martin to be a great songwriter. It’s been said he comes up with melancholy lyrics, but I find his style deeply meditative and the riffs Jonny Buckland comes up with to be by contrast uplifting, For me, it’s this mix of uplifting melodies combined with deep lyrics that makes Coldplay interesting and I anticipate which direction their next album will take eagerly.

This documentary has unearthed a tonne of archive footage: often home movie recordings , combined with live performances and radio interviews. The archival nature of the footage and recording quality is why there is no Blu Ray here. Although I consider myself a huge fan, I learnt quite a bit from this movie:

- Chris is as funny off camera (duty) as on . You either like his goofy sense of humour or you don’t , I find him charming
- Phil Harvey comes across as the epitome of the English public schoolboy. People can read this comment either way I suppose, but the good attributes are good manners, compassion, and a sense of fairness. That comes across in all the band does (Chris went to the same school)
- Both Phil & Chris we’re sporty at school it appears, appearing in the cricket team. Chris may have been rubbish at rugby, but it appears he excelled in cricket. He is not as goofy as he makes out
- Chris’ family motto is “Never Give Up”: instilled in him by his father, and the last line of their last song on their latest album “Up & Up”
- They seem to have liked the camera before they were famous, I was shocked at how much footage they dug out of their uni years - this was before the advent of smart phones!
- Guy is teased for “making a good hairdresser, who should go into a business with a guy name Toni” :)
- Guy had a drinking problem “to escape from himself”.
- Will is the sound, level headed member of the band who is able to get the band to reach consensus on creative decisions, like track listing for the next album

If there is one criticism of the movie, it would have been nice to have seen them interviewed today but as Chris says at the start he was not keen on appearing on the movie in this way.

This documentary is a nice complement to the excellent book by Debs Wild, this time focusing on home videos, photos, interviews and live performances, with archive recordings of interviews with the band over . A great Christmas gift for any Coldplay fan (no they are not paying me to write this review!)

kerrygold71
5,0 de 5 estrelas Highly recommend if you are a Coldplay music lover , perfection 🦋
Avaliado no Reino Unido em 9 de dezembro de 2018
Compra verificada
Absolutely love it , love Coldplay and have done since their very first album .
I’ve seen the film rockumentary at our local odean cinema on the 14th of November and loved it .

unfortunately for me due to certain circumstances I have never ever seen Coldplay live in concert , live cd albums or seeing them live on the television is my only chance to see them perform live , I will one day see them live because it is in my bucket list .

MinsBee
5,0 de 5 estrelas Coldplay best live act ever
Avaliado no Reino Unido em 7 de dezembro de 2018
Compra verificada
Only got this item today. I saw Coldplay in Miami last year the concert was the best ever. 4 weeks later we flew from the UK to see them in Pasadena and that was even better. Can’t wait to see the DVD and listen to the CD to relive the experience.
Ler mais
6 pessoas acharam isso útil
Útil
Enviando feedback...
Agradecemos seu comentário.
Desculpe, o registro do seu voto falhou. Tente novamente
Informar abuso
Traduzir avaliação para Português

I've seen this tour 5 times live in 4 venues in the last few years and know exactly how good they are. But for a band with such a colourful tour to not release a blu ray is totally bizarre for starters.

Add to that, where we have to put up with poor DVD quality....the actual audio for this concert is absolutely terrible....sounds like someone's phone being held up in the audience. It's embarrassing and such a shame as the sound in the actually stadiums I went to was amazing.

LS
5,0 de 5 estrelas Excellent DVD/CD collection!
Avaliado no Reino Unido em 2 de fevereiro de 2019
Compra verificada
If you love the "Head full of dreams" tour - this collection is for you. It comes in four parts: 1) DVD - a rockumentary about how Coldplay became they phenomenon they are. It's interesting, witty and funny 2) DVD - the "Head full of dreams" concert in Sao Paulo"; brilliant - I can only say wish I had been there. For those who weren't, this is the next best thing. 3) & 4) are CD's of the tour in Buenos Aires. For me Coldplay are the best stadium band and the last tour was the best yet. I couldn't think of a better collection for Coldplay fans.
Ler mais
2 pessoas acharam isso útil
Útil
Enviando feedback...
Agradecemos seu comentário.
Desculpe, o registro do seu voto falhou. Tente novamente
Informar abuso
Traduzir avaliação para Português

Rahmat Kurniawan Prasetyo
4,0 de 5 estrelas 8 out of 10 for me
Avaliado no Reino Unido em 20 de dezembro de 2018
Compra verificada
After waiting for so long. Good packaging. The double CD's awesome. The DVD Live in Sao Paulo: I need to turn up the volume to hear the musics than the sound of the crowds 😂. The documentary: surprising.

Funtime
4,0 de 5 estrelas Good concert gimme da Blu-ray
Avaliado no Reino Unido em 28 de dezembro de 2018
Compra verificada
Had to see the concert in Manchester due to holiday and have been waiting 18 months for Blu-ray, trying on you tube to create the amazing day, happy with the dvd but volume had to be on 80 instead of the marvel film setting of 35, please gimme a full Blu-ray
Ler mais
1 pessoa achou isso útil
Útil
Enviando feedback...
Agradecemos seu comentário.
Desculpe, o registro do seu voto falhou. Tente novamente
Informar abuso
Traduzir avaliação para Português

Bob Kitchen
3,0 de 5 estrelas Disappointing
Avaliado no Reino Unido em 24 de fevereiro de 2019
Compra verificada
I didn't want to believe what other reviewers have said about this package but, sadly, they are correct. The sound quality on the live concerts is really disappointing. No amount of equalisation makes the audio pleasing to the ear. If you want a dvd of a concert which gives you the impression of being buried in the crowd them this is it. Ambience is everything on the dvd; vocal and musical definition is almost non-existent. Really disappointed!!
Ler mais
Útil
Enviando feedback...
Agradecemos seu comentário.
Desculpe, o registro do seu voto falhou. Tente novamente
Informar abuso
Traduzir avaliação para Português