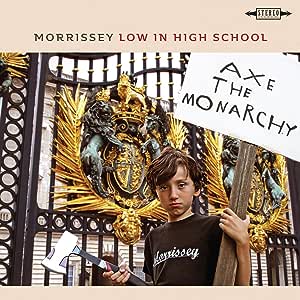 Miquette
3,0 de 5 estrelas Glad To Have You Back, Morrissey !
Avaliado no Reino Unido em 6 de maio de 2018
Compra verificada
After Ringleaders and Years of Refusal I had just about given up on Morrissey. They were such poor, drab albums lacking in ideas and a tune. What a refreshing album Low In High School Is. It is almost up to the standard of You are The Quarry and better than Maladjusted. The backing is excellent. Morrissey's vocals are very relaxed. There are tunes a plenty. Good grief, you can even dance a tango to one of the tracks. You half expect castanets in another. Another gives you a rhythm not dissimilar to Alsatian Cousin on hie Viva Hate album. As you would expect, Morrissey has plenty to say, so his lyrics are strong. But they are interesting, not all about self (which his last two albums were). Morrissey we missed you. So glad you're back !
I am not one to give everything five stars like so many on Amazon. No. Five stars would have to be a classic. Four would have to be a very high standard, with many standout tracks and no fillers. Three stars is more than worthy in my opinion. Morrissey IMO has never made a five star album as a solo artist. Most haven't. Here's how I would rate his albums to date for you to put this one into perspective:
Viva Hate ****, Kill Uncle **, Arsenal ***, Vauxhall ****, Southpaw ****, Maladjusted **, Quarry ****, Ringleaders *, Refusal *, Low In High School ***

Amazon Customer
5,0 de 5 estrelas Spent the day in bed, "to make you feel that your mind isn't your own"
Avaliado no Reino Unido em 9 de janeiro de 2021
Compra verificada
Spent the day in bed....Listen and if you wish to take his advise regarding the so called "news" then do, good album Thank you Stephen
Ler mais
1 pessoa achou isso útil
Informar abuso
Traduzir avaliação para Português