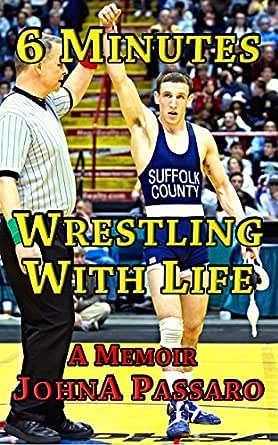 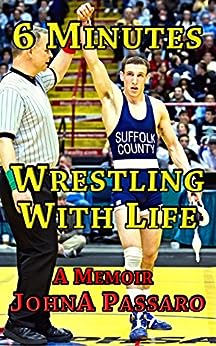 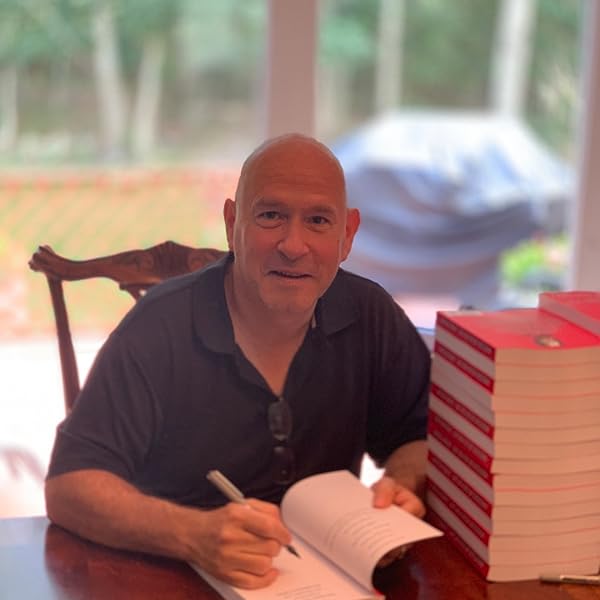 6 Minutes Wrestling with Life: How the Greatest Sport on Earth Prepared Me for the Fight of My Life (Every Breath Is Gold Book 1) (English Edition) eBook Kindle

Ervsbookreviews
5,0 de 5 estrelas A great read that every wrestler that wants to be good should read.
Avaliado nos Estados Unidos em 13 de novembro de 2018
Compra verificada
I will agree with every review written about how great this story is. It is long and great reading and I am sure I will read it many many times as I enjoyed it that much. This is not a kindle that just deals with wrestling although if you read this I am confident it will help your wrestling 100%. So very much of wrestling has to do with a persons thoughts and beliefs.
You stand a better chance at winning at wrestling if you have the right frame of mind. You must feel like you can win, you must want to win and many other mental things involved in wrestling. You have to think about your conditioning and are you in good enough shape to wrestle 6 hard minutes. This read helps a person whether they are a wrestler or not. If you are a wrestler this kindle will help you to do everything right. I liked this story very much.

Angela M. Gasper
5,0 de 5 estrelas Wrestling is life, need a say more.
Avaliado nos Estados Unidos em 17 de março de 2019
Compra verificada
You don't need to be a wrestling fan to appreciate this book. I agree that wrestling teaches you things you will use your whole life through and the craziness that John went through its a testament to that. As a parent, he echoes what any one of us would do for our children but he goes above and beyond in my opinion. Again, as a parent, he has changed my thinking when it comes to advocating for our kids. Some people might think he is over the line but the book is worth the read as i learned a few things. I will be getting more of his books.
Ler mais
2 pessoas acharam isso útil
Útil
Enviando feedback...
Agradecemos seu comentário.
Desculpe, o registro do seu voto falhou. Tente novamente
Informar abuso
Traduzir avaliação para Português

Robin Landry
5,0 de 5 estrelas Amazing
Avaliado nos Estados Unidos em 14 de outubro de 2013
Compra verificada
Once I started this book I couldn't put it down. I've never read such an inspirational book in my life. The passion and single-mindedness of the author shines through, and when someone is that passionate about something, you can't help but pay attention.

If a life could be read backwards, we would all see why we have gone through some of things we have, gaining skills that will be needed later, and John Passaro gives us a perfect example of this. His drive, ambition and unwillingness to give up showed up early in his life, and John used that drive to wrestle. While his hard work and dedication didn't morph into a stellar wrestling career, the skills he learned pursuing his dream did lead him to something he cherished more, saving his daughter.

I'm not giving anything away to say that John's teenage daughter slipped into a coma, this happens in the first chapter of his story. What gets John through the toughest time of his life, is the skills he'd learned through a sport he didn't excel at. Instead of lapsing into bitterness over what he perceived as a lot of wasted effort, John got on with his life and coached his two sons in wrestling, both of whom did excel.

Sure bad things happen to people, but it's what they do about misfortune that intrigues us. What happened to John is the worst thing imaginable, and had he not been the kind of person who had the grit to continue on, not only his life would have fallen apart, but the lives of his family and others close to him.

This is the kind of book you want to give to others who've, as John puts it, joined the 'club'. Anyone who's in the club knows exactly what he's talking about. If you, or someone you know has suffered an unthinkable loss, crawled your way out of a forest of grief to join again, the land of the living, then you're in the club.

You might think it's a downer to read about all the bad things that can happen to a person, but reading John's story has the opposite effect. His story makes you glad to be human and sharing the same spirit with other humans knowing how grand we can be in face of adversity.

John starts off each chapter with the words of famous people we've all admired over the years to show the human spirit at its finest. I particularly love the John F. Kennedy speech where JFK tells us that we're going to the moon just to show what we Americans are made of. If there's a politician out there today who can come close to being that inspiring, I haven't heard from him/her.

What we need today is heroes, and we know who they are by what they've overcome. John Passaro is now one of mine.
Ler mais
5 pessoas acharam isso útil
Útil
Enviando feedback...
Agradecemos seu comentário.
Desculpe, o registro do seu voto falhou. Tente novamente
Informar abuso
Traduzir avaliação para Português

Pearl
5,0 de 5 estrelas I loved this book
Avaliado nos Estados Unidos em 19 de julho de 2014
Compra verificada
I loved this book. What an inspiration John Passaro is. He writes about his day to day struggles with his eldest daughter, Jess. She collapsed at home with a seizure. Later in the book he tells the reader that his daughter had meningitis. The love and compassion that he and his wife display for their daughter is beautiful. He has his good and bad days, but over all he triumphs. It's a great read. I couldn't put it down. I felt like I knew the family.
Ler mais
1 pessoa achou isso útil
Útil
Enviando feedback...
Agradecemos seu comentário.
Desculpe, o registro do seu voto falhou. Tente novamente
Informar abuso
Traduzir avaliação para Português
Carregar mais avaliações internacionais

Fern Rosenberg
5,0 de 5 estrelas A must- read for any parent
Avaliado nos Estados Unidos em 16 de março de 2013
Compra verificada
What a honest and riveting read for any parents. The pain and challenges faced by the Passaros are palpable to every parent whose unconditional love and faith is put to the ultimate test. As parents of a wrestler, we were already familiar with the wrestling Passaros -now we feel we know the Passaros, the family. We couldn't put it down/ and encourage everyone to learn the lessons with them - on how to meet life's most gripping challenges- often first developed on the wrestling mat. I hope there's a follow-up. You needn't be a wrestling fan to appreciate and identify the love and strength two parents exhibit when put to the test. As a wrestling fan and parent , I couldn't put it down. Tonight, turn off the TV and read a real-life story.
Ler mais
3 pessoas acharam isso útil
Útil
Enviando feedback...
Agradecemos seu comentário.
Desculpe, o registro do seu voto falhou. Tente novamente
Informar abuso
Traduzir avaliação para Português

mjg3
5,0 de 5 estrelas Always Believe
Avaliado nos Estados Unidos em 30 de maio de 2014
Compra verificada
This book is so much more than a "wrestling book" or a "baseball book"! 6 Minutes Wrestling With Life is a book about life. About dedication. About always believing. About heart. About love. About teamwork, passion, and a singleness of purpose. Mr. Passaro draws from the lessons he learned as a wrestler and baseball coach to find the strength to confront every parent's worst nightmare, an injury to their child. In doing so, and writing about it, he teaches us how to live our lives each and every day.
Every parent should get this book. It is a quick read but be sure to block out 3 hours or so because you won't be able to stop.
Ler mais
1 pessoa achou isso útil
Útil
Enviando feedback...
Agradecemos seu comentário.
Desculpe, o registro do seu voto falhou. Tente novamente
Informar abuso
Traduzir avaliação para Português

Kerri Gibbons
5,0 de 5 estrelas An Inspirational Story for All !
Avaliado nos Estados Unidos em 21 de janeiro de 2014
Compra verificada
As a wrestling family of course we enjoyed this read, however, this touched me even more as a PARENT ! This book had me laughing one moment and in tears the next.. I would highly recommend this book for anyone and any family that sometimes finds that life doesn't always go the way you have planned. The Passaro family and how they have handled themselves in a life changing situation has touched and inspired my entire family...Both myself, my husband and our three children could not put this book down. Thank you to the Passaro family for sharing some very private moments with us. My entire family have each taken something from this book which I am sure we will always remember.

Steven Culver
5,0 de 5 estrelas Inspirational Book
Avaliado nos Estados Unidos em 12 de março de 2014
Compra verificada
Anyone who has wrestled knows that "Once you've wrestled, anything in life is easy". John Passaro is a man who tells his story of how that statement is put to the test in the tournament that is life - Survive and advance. I wouldn't necessarily consider it a "wrestling book" but rather a book about parenting by a wrestler. If you could identify with being a wrestler, being a parent, or having a sick child, this turns into a real "page turner".
Ler mais
1 pessoa achou isso útil
Útil
Enviando feedback...
Agradecemos seu comentário.
Desculpe, o registro do seu voto falhou. Tente novamente
Informar abuso
Traduzir avaliação para Português

Michael S. Walpole
5,0 de 5 estrelas As a former wrestler myself, I bought this book ...
Avaliado nos Estados Unidos em 7 de outubro de 2014
Compra verificada
As a former wrestler myself, I bought this book initially because i thought it was going to be mostly about wrestling. but it was much more than that. Even though its not 100% wrestling related, it shows you how wrestlers can champion over any obstacle in life. It really moved me and made me make an account of your own life and realize that no matter how hard you think you have it, someone out there has it harder. However, if they can fight and battle through it, so can you.
Ler mais
2 pessoas acharam isso útil
Útil
Enviando feedback...
Agradecemos seu comentário.
Desculpe, o registro do seu voto falhou. Tente novamente
Informar abuso
Traduzir avaliação para Português

Lois
5,0 de 5 estrelas A must read.
Avaliado nos Estados Unidos em 18 de fevereiro de 2018
Compra verificada
This book was worth the read but more than that, it made me ponder about my own life and what I'm doing with it.
Ler mais
Útil
Enviando feedback...
Agradecemos seu comentário.
Desculpe, o registro do seu voto falhou. Tente novamente
Informar abuso
Traduzir avaliação para Português