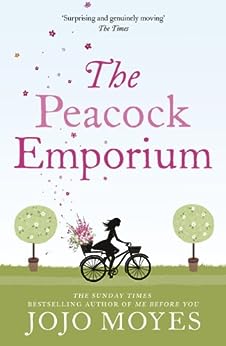 Jojo Moyes is the #1 New York Times bestselling author of The Giver of Stars, Me Before You, After You, Still Me, Paris for One and Other Stories, One Plus One, The Girl You Left Behind, The Last Letter from Your Lover, Horse Dancer, Silver Bay, The Ship of Brides, and The Peacock Emporium. She lives with her husband and three children in Essex, England. --Este texto se refere à uma edição alternativa kindle_edition

Ruth The Reader
1,0 de 5 estrelas Couldn't make myself finish the story
Avaliado no Reino Unido em 25 de maio de 2016
Compra verificada
I've never left a negative review before, I feel guilty as I know I couldn't do better but...

I haven't given up on a book for a very long time but I couldn't put myself through reading anymore of this one. My kindle informed me that I'm 51% of the way through the story and I can't face the next 49%. There are too many good books out there to waste my time reading this one.

The story jumps about too much, it's all over the place. More than once I had to check I'd not accidentally changed books, a new chapter can start with a totally new situation and totally new characters. Vivi was the only character I liked yet still not enough to care about what happens to her. I found it hard to care about any character as there were so many who were all having many pages and even chapters dedicated solely to them.

I feel that Jojo's has tried to be too fancy and flowery with her writing in this book. My mind wandered multiple times to the point where I was having to read multiple pages again to discover that I'd missed absolutely no story or character progression, no wonder my mind was wandering!

I really enjoyed Me Before You and will give Jojo's writing another go as I'm sure she can't have written too many books like this one.
Ler mais
23 pessoas acharam isso útil
Informar abuso
Traduzir avaliação para Português

lynsey adams
4,0 de 5 estrelas Mixed feelings
Avaliado no Reino Unido em 28 de abril de 2019
Compra verificada
First of all, don't be taken in by the cover illustration, which is totally wrong for the book. It gives the impression that this is lighthearted, quirky 'chick-lit', which it certainly isn't. That doesn't make it a bad book, just don't read it if you want an easy read which will cheer you up. The same goes for the lighthearted title. Although there are some laugh out loud moments, this is a fairly uncomfortable read.
Even a 'lesser' JoJo Moyes book is better than most others' best efforts, so in a way it is difficult to criticise. It is intelligently written and like most of her other books is complex and multi-layered, requiring total concentration from the reader and even going back and re-reading bits to make sure you didn't miss something somewhere. The main problem is that most of the characters, with the exception of Vivi and to some extent Jessie, are so unlikeable and dysfunctional that you want to slap them. Vivi you want to shake rather than slap, but at least you have some sympathy for her. By the end of the book and following the arc of development of the characters, you can understand why they are like they are, but it means a long wait and a lot of annoyance and exasperation on the part of the reader before you come to this understanding, and I'm not sure if it's worth the hours spent disliking almost everybody just to get to the end. Having said that, it must take a good deal of talent and confidence to write a book where the characters are mostly so unlikeable and annoying that there's a fair chance of alienating most of your readers. I can't say I enjoyed the book exactly, but I recognise that Ms Moyes is a very good writer. On balance I would rather have a book that is well written to the point where it makes me genuinely dislike most of the characters, than one where they are one dimensional and shallow and the writing is poor. But it is rather heavy going.

PS Edit. Thinking about it, there are some minor characters who are rather poignant and even likeable. The writer does poignant very well and it would have been good to hear more about those characters.
Ler mais
3 pessoas acharam isso útil
Informar abuso
Traduzir avaliação para Português

comm88
1,0 de 5 estrelas Awful just about sums it
Avaliado no Reino Unido em 22 de dezembro de 2018
Compra verificada
Sugary sweet and very sickly!!! I managed just 8% of this and hated it from page one. Just awful. The concept is tired - seen it all before in books that are much better than this. The writing is forced flowery with hackneyed expressions and limipd descriptions. The characters were vapid and utterly unengaging. It tries to be a cross between the excellent Atonement and the thoroughly wicked Lady Chatterley’s and comes nowhere close to either. Life is just way too short to waste my eyes on this. I’ve thoroughly enjoyed much of what she’s written, but this simply isn’t worth your time.
Ler mais
1 pessoa achou isso útil
Informar abuso
Traduzir avaliação para Português

Tel
1,0 de 5 estrelas Not worth reading, I’m afraid
Avaliado no Reino Unido em 20 de março de 2020
Compra verificada
After reading three of Jojo’s other books I was disappointed in this one. Tedious, slow, boring, going nowhere, characters that I couldn’tw arm to, a story line that lacked plot and purpose. Waste of money this time. As I said, disappointed.
Ler mais
Informar abuso
Traduzir avaliação para Português

Caroline
1,0 de 5 estrelas Slow slow slow - I’ve given up
Avaliado no Reino Unido em 16 de julho de 2018
Compra verificada
Peacock emporium: Wasn’t what I was expecting having read and LOVED the me before you trilogy. Starts in 1960’s and it felt like I was reading a period piece. It’s besn such a slog and I’m only 12% in. I dread reading it and am desperate for it move along but life’s too short and so I’m stopping reading it. Something I never ever do but life’s too short for rubbish books. God knows which book the 5* reviews are reading but I get the feeling it’s not this one...I’m also wondering what the publishers were thinking too!
Ler mais
Informar abuso
Traduzir avaliação para Português
Visualizar todas as avaliações
Voltar ao início
Conheça-nos
Ganhe dinheiro conosco
Deixe-nos ajudá-lo
Pagamento
E não se esqueça:
© 2012-2021, Amazon.com, Inc. ou suas afiliadas