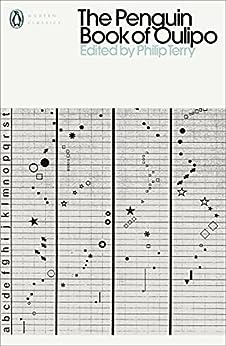 Philip Terry is a translator, and a writer of fiction and poetry. He has translated the work of Georges Perec, Stéphane Mallarmé and Raymond Queneau, and is the author of the novel tapestry, shortlisted for the Goldsmiths Prize. His poetry volumes include Oulipoems, Shakespeare's Sonnets, Dante's Inferno, Quennets, Bad Times and Dictator, a version of the Epic of Gilgamesh. He is currently translating Ice Age signs. --Este texto se refere à uma edição esgotada ou disponível no momento.

Mac McAleer
4,0 de 5 estrelas An Anthology of Constraints
Avaliado no Reino Unido em 3 de dezembro de 2019
Compra verificada
This is a comprehensive anthology of excerpts from Oulipo (1) writings. All are in English (2). It has the advantage of being wide ranging, which is both fascinating and confusing. Oulipo was formed in 1960, but it has also co-opted earlier, sometimes much earlier, writings under the unfortunate name of “Anticipatory Plagiarism”. There are several examples of these (3).

THE BOOK’s front and back covers deserve inspection (4). Most of the book consists of the 500 pages of the anthology entries (5). There are exactly 100 entries, dominated by Raymond Queneau, Georges Perec and Italo Calvino (6). I would have liked a short paragraph before each entry explaining why it is considered Oulipo and what its constraints are. However, this book works well as an anthology implying that it is designed to be browsed rather than read sequentially.