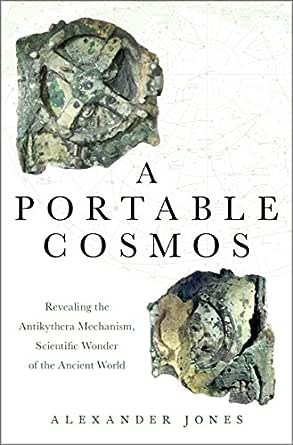 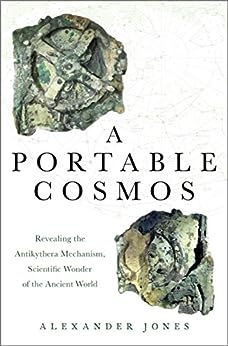 Alexander Jones is a classicist and historian of science whose interests center on astronomy and related scientific traditions in the Greco-Roman world and the ancient Near East. Before joining the Institute for the Study of the Ancient World in 2008, he was for many years on the faculty of the Department of Classics and the Institute for the History and Philosophy of Science and Technology at the University of Toronto. --Este texto se refere à edição hardcover.

Oldsirhippy
5,0 de 5 estrelas Very good book written by an expert
Avaliado no Reino Unido em 16 de maio de 2017
Compra verificada
A historical perspective on the Antikythera mechanism.
Professor Jones knows his subject well and brings in a great deal of relevant history from the era of the mechanism. The mechanism is a truly remarkable device, way beyond the understanding of most people of that time and even today the technics used to model the sun and the moon is very advanced. Had this device not been discovered in the early 1900's we would still be unaware that the Greeks produced very advanced geared mechanisms over 2000 years ago.

B. O. Reilly
5,0 de 5 estrelas This is a good introduction to how the workings of an ancient mechanism were discovered.
Avaliado no Reino Unido em 16 de outubro de 2019
Compra verificada
The Antikathera Mechanism is a mechanical device parts of which were recovered from an ancient shipwreck at the beginning of the twentieth century. Since the middle of the twentieth century there has been a lot of research to find out what it did and how it worked. There are only two really good books about the Antikathera Mechanism and this is one of them. (The other is "Decoding the Heavens" by Jo Marchand. That book is about ten years old) This book brings the story more or less up to date. The reason the mechanism has fascinated researchers for so long is that it is more complicated than any mechanism which was known to have existed at the time.
Ler mais
Útil
Enviando feedback...
Agradecemos seu comentário.
Desculpe, o registro do seu voto falhou. Tente novamente
Informar abuso
Traduzir avaliação para Português

The BoatBuilder
5,0 de 5 estrelas Very thorough!
Avaliado no Reino Unido em 2 de julho de 2019
Compra verificada
This book is packed with information.
It explains how related knowledge of the planets at the time of the Babylonians and Greeks influenced understanding of the device.
I wish the diagrams were closer to the text that refers to them. Otherwise an excellent book.

Teresa Blunt
5,0 de 5 estrelas Excellent, very comprehensive coverage of the subject
Avaliado no Reino Unido em 30 de setembro de 2017
Compra verificada
Excellent, very comprehensive coverage of the subject. We learn many fascinating aspects of the ancient world, such as how they organised their calendars, and at the same time we follow the exciting story of the discovery of the Antikythira Mechanism and the research which gradually revealed how it worked and what it was made for. The approach is academic and scientific, but also readable for the non-expert, like myself.
Ler mais
1 pessoa achou isso útil
Útil
Enviando feedback...
Agradecemos seu comentário.
Desculpe, o registro do seu voto falhou. Tente novamente
Informar abuso
Traduzir avaliação para Português

Philip R.
5,0 de 5 estrelas An insightful and interesting read.
Avaliado no Reino Unido em 17 de maio de 2018
Compra verificada
If you thought we were the original technological culture, think again! This has just the right mix of historical depth and mechanical insight to hold your interest, without all the technical baggage that could so easily have choked a book on this subject to death.
Ler mais
Útil
Enviando feedback...
Agradecemos seu comentário.
Desculpe, o registro do seu voto falhou. Tente novamente
Informar abuso
Traduzir avaliação para Português

John S. Reid
5,0 de 5 estrelas A grand tour of the Antikythera Mechanism, and background information
Avaliado nos Estados Unidos em 13 de dezembro de 2019
Compra verificada
The Amazon review of Aug. 1, 2018 by Andrew Love is probably the definitive Amazon review of this book (thus far). The only things I can add to that review are as follows. (1) At some points (e.g., Ch. 7 regarding planetary motions) the narrative gets a bit dry in tracing the historical background. I can see where the author is going (i.e., trying to establish what was within the realm of knowledge of the ostensible Greek maker of the device circa 70 BC), but it can get a bit tedious. (2) The descriptions of the device itself are generally very good, with the exception of the description of the epicyclic gearing at pgs 216-222, and the accompanying figures (Figs. 8.17, 8.20 & 8.21). However, an internet search on “epicyclic pin-and-slot gear” provides useful links to video clips which show how this gearing works. Basically, the epicyclic gear is mounted on an offset axis so that the rate of rotation of this gear varies as the gear spins around this offset axis (thus mimicking the elliptical orbit of the moon). The pin-and-slot configuration is used to ensure that the epicyclic gear maintains engagement with the driving gear during this “wobbly” rotation by alternately pulling and then pushing the epicyclic gear respectively towards, and then away from, the driving gear.

What makes the Antikythera Mechanism truly amazing are: (1) the ability of the maker to fabricate a device which modeled the solar system (with reasonable accuracy) based upon on a fundamentally flawed understanding of the solar system (i.e., the geocentric model); and (2) the level of fabrication skill that was available to the maker of this device over 2000 years ago. We like to think of meticulous mechanical fabrication, and astronomical observation, as being something that has developed over only the last 500 years or so. But the fact that the Antikythera Mechanism was fabricated over 2000 years ago, and incorporated scientific theories regarding the workings of the cosmos at that time, should give us pause to consider that perhaps our ancestors were smarter that we give them credit for. Unfortunately most of that knowledge and skill was lost in the dark ages (about 200 AD to 1500 AD). We stand where we are today by the benefit of accumulated knowledge since about 1500 AD, but we should also stand in admiration of those who went before us over 2000 years ago who were the true pioneers of science.

What is profound about this book is the warning from Ptolemy (pg. 245) that “it could be misleading to … judge that an astronomical hypothesis was false because one could not make a working model of it in the workshop.” The same applies equally today with respect to mathematical models of the universe – they are only models, and lack profound understanding of the underlying workings.

While there are other books available on the subject of the Antikythera Mechanism (and I confess that I have not read any of them), this book was sufficient for me to understand the history of the artifact itself, its mechanical features, and the historical background behind its manufacture. It is rare that I don’t end up buying at least two more books as a result of reading a first book on a topic, but in this case the current book satisfied all of my desires to learn about the Antikythera Mechanism.