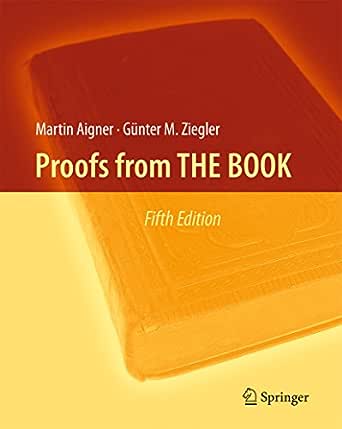 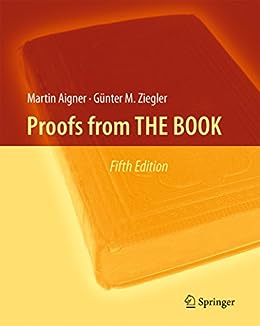 This revised and enlarged sixth edition of Proofs from THE BOOK features an entirely new chapter on Van der Waerden’s permanent conjecture, as well as additional, highly original and delightful proofs in other chapters.

“… It is almost impossible to write a mathematics book that can be read and enjoyed by people of all levels and backgrounds, yet Aigner and Ziegler accomplish this feat of exposition with virtuoso style. […] This book does an invaluable service to mathematics, by illustrating for non-mathematicians what it is that mathematicians mean when they speak about beauty.”

"... Inside PFTB (Proofs from The Book) is indeed a glimpse of mathematical heaven, where clever insights and beautiful ideas combine in astonishing and glorious ways. There is vast wealth within its pages, one gem after another. ... Aigner and Ziegler... write: "... all we offer is the examples that we have selected, hoping that our readers will share our enthusiasm about brilliant ideas, clever insights and wonderful observations." I do. ... "

"... This book is a pleasure to hold and to look at: ample margins, nice photos, instructive pictures and beautiful drawings ... It is a pleasure to read as well: the style is clear and entertaining, the level is close to elementary, the necessary background is given separately and the proofs are brilliant. ..."

"Martin Aigner and Günter Ziegler succeeded admirably in putting together a broad collection of theorems and their proofs that would undoubtedly be in the Book of Erdös. The theorems are so fundamental, their proofs so elegant and the remaining open questions so intriguing that every mathematician, regardless of speciality, can benefit from reading this book. ... "

Martin Aigner received his Ph.D. from the University of Vienna and has been professor of mathematics at the Freie Universität Berlin since 1974. He has published in various fields of combinatorics and graph theory and is the author of several monographs on discrete mathematics, among them the Springer books Combinatorial Theory and A Course on Enumeration. Martin Aigner is a recipient of the 1996 Lester R. Ford Award for mathematical exposition of the Mathematical Association of America MAA.

Günter M. Ziegler received his Ph.D. from M.I.T. and has been professor of mathematics in Berlin – first at TU Berlin, now at Freie Universität – since 1995. He has published in discrete mathematics, geometry, topology, and optimization, including the Lectures on Polytopes with Springer, as well as „Do I Count? Stories from Mathematics“. Günter M. Ziegler is a recipient of the 2006 Chauvenet Prize of the MAA for his expository writing and the 2008 Communicator award of the German Science Foundation.

Martin Aigner and Günter M. Ziegler have started their work on Proofs from THE BOOK in 1995 together with Paul Erdös. The first edition of this book appeared in 1998 – it has since been translated into 13 languages: Brazilian, Chinese, German, Farsi, French, Hungarian, Italian, Japanese, Korean, Polish, Russian, Spanish, and Turkish.

Gregory Connor
4,0 de 5 estrelas Some memorable simple proofs
Avaliado no Reino Unido em 7 de julho de 2020
Compra verificada
The book has a number of simple, memorable and elegant proofs -- it is great fun to work through Erdos' clever proof that the infinite sum of the reciprocals of all prime numbers diverges, for example. It is a good book for dipping into and out of, but I did not read it thoroughly from cover to cover.
Ler mais
Informar abuso
Traduzir avaliação para Português

Peter Grogono
5,0 de 5 estrelas The "must have" book for everyone who loves mathematics
Avaliado no Canadá em 25 de novembro de 2018
Compra verificada
"THE BOOK" is, of course, a creation by the late Hungarian mathematician Paul Erdős - a mythical "bible" containing the most elegant and insightful proofs of important theorems. You might think that only serious mathematicians would be able to understand these proofs, but it is not so. Many are quite elementary, and most are accessible to anyone with an undergraduate degree in mathematics or physics, or even people who just enjoy reading mathematics. There are many pleasant surprises: one of the first is a proof that there are an infinite number of primes - using topology! I won't give any more spoilers. The book is not cheap but it is good value: you will get many hours of delight and amazement from it.
Ler mais
2 pessoas acharam isso útil
Informar abuso
Traduzir avaliação para Português