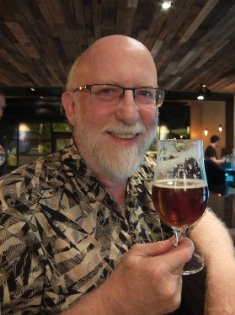 From the Foreword, The Marvel of Mosher, by Michael Jackson:

The world desperately needs more Moshers. If only we had more Moshers, the Tasmanian tiger might return from extinction. Mike Tyson at his peak would be able to step into the ring with Muhammad Ali. We would be able to see and hear the great performers who pre-dated the recording of sound. I might even now be sipping a pre-Prohibition beer and checking whether Buddy Bolden could be heard across Lake Ponchartrain. Or I might be sampling Harwood's Porter in a London pub, or an India Pale Ale aboard a clipper heading for Calcutta.

A master of brewing science, Randy Mosher (Chicago, IL) applies his restless curiosity and creative energy toward the art of brewing.

As a veteran and award winning brewer, Randy Mosher knows the rules of brewingDand when to break them. He is the author of The Brewers Companion (Alephenalia Publications, 1994), the homebrewing columnist in All About Beer, a regular contributor to Zymurgy (the Journal of the American Homebrewers Association) and is a frequent lecturer on beer across the country. He is also on the board of directors of the American Homebrewers Association and the Chicago Beer Society.

With a background in advertising graphics, Mosher has been a creative force in homebrewing for more than 20 years. In Radical Brewing, he shares his many discoveries and secrets (try the recipe for Tangerine Porter) with an amusing tone and gently bent approach that will engage new brewers and captivate creative thinkers of all types.

From Chapter 1, An Embellished History of Beer:

9999 B.C.E Neolithic people sick of gruel. Wonder what else they can do with barley.

8999 B.C.E. Final contestant in barley cook-off comes up with a winner: crock-aged festering sprouted barley-cake bisque with bitter herbs, actually much more enjoyable than it sounds. Dubbed beer, it's much better than gruel. The formerly neglected Goddess of Gruel becomes fashionable new Goddess of Beer, now in big demand at parties everywhere across Fertile Crescent.

From Chapter 8, Lager On:

The stereotype of Germany is of a country where everything fits into scrupulously tidy compartments, utterly regulated, suiting the tastes of the residents like a pair of custom- fitted lederhosen. I've heard brewers there bemoan the situation that brewing a beer outside of well-established styles is not only frowned upon, but in some cases simply not permitted.This is belied by a strong interest in such Americana as free jazz and the artistic oeuvre of David Hasselhoff. And if you look carefully, you might see an eccentric beer that slips outside the carefully constructed framework of allowable brews. Black, roasty, caramelly schwarzbier is such a product.

From Chapter 12, Hops Are Just Another Herb, Mon:

In the long, broad history of beer, the hop is a relative newcomer. Hops began to be used in beer about 1100 C.E. in Europe, and much later in the British Isles. For a few centuries, herbed beers existed side-by-side with hopped beers before they were superseded by more modern fashion and banned by edicts such as the Reinheitsgebot.

Many lingered on until fairly recently. During the nineteenth century, spiced beers still lived, albeit in the margins. Heather ale was being brewed in the hills of Scotland; an anise beer called "swankey" was made in Pennsylvania; rustic spiced country brews were slowly winking out in England.

Some survive to this day. A cloudy, delicately spiced Belgian wheat beer called "wit" vanished for a few decades, then was resurrected. In Berlin, the local wheat beer, a light, yogurty brew called weisse, is still commonly served with a dash of syrup made from an herb called woodruff, while in the same region other spiced white ales such as gose and kotbuss still linger. North into Scandinavia, strong, juniper-tinged beers provide a delicious link to the past for the enthusiastic caretakers of the style.

In violation of one of the most sacred principles of quality homebrewing, I'm going to recommend that you add that evil, dreaded bogeyman--sugar--to your beer. Not just any sugar. High-performance sugar. This is the dark, gooey crystallized sweetener that bears as much resemblance to the white stuff as homebrew does to industrial beer--the other purified white stuff. Specialty sugars with a variety of ethnic origins are available these days, and contrary to what you might have been taught, they really can add to a beer.

From Chapter 17, Forward Into The Past:

First, a thin white film of mold formed, then changed to bluish green, which accounted for the first two weeks. Then, bubbling gas started coming up from the wort and broke up the film, which, in turn, further sped up the fermentation. This proceeded very vigorously for ten to fourteen days, and provisions needed to be made to retain and return the overflow to the fermenter. In the third phase, the yeast kind of settled out. Then another film formed on the surface--white at first, then dark brown, then at last green, growing and thickening, folding itself up into great ridges as it floated on the surface.

From Chapter 19, Save the Bees:

Many scholars believe mead may have been the first fermented beverage. And the fact that the same Indo-European root word, medhu, means "honey," "sweet," and "drunkenness" is further evidence for this. Honey won't ferment in its natural concentrated form, but as soon as it is diluted--when combs are washed out, for example--it starts to ferment. There is, in fact, no ancient technology capable of stopping it more than temporarily. With no cooking or crushing needed, it's the simplest alcoholic beverage to make, and probably appeared just as soon as humans created something to put it in. The rock art of one Neolithic society, at Tassili-n-Ajjer in Algeria, prominently features a zoomorphic "bee-man," which is suggestive of their familiarity with the other sort of buzz that bees create. Never mind the fact that he is covered head-to-toe with magic mushrooms as well.

L
5,0 de 5 estrelas Brewing Smorgasbord
Avaliado no Reino Unido em 14 de agosto de 2017
Compra verificada
Haven't brewed for years and one lonely evening decided to look at how far the hobby has come. Wow. It's now possible to own your own nano brewery....albeit at a cost. This is one of three books I bought....in the hope that at least one would be decent. Truth be told...they are all outstanding books and compliment each other wonderfully. The other two are Brew Your Own's Big Book of Homebrewing- fantastic recipes with pictures and How to Brew by John Palmer- awesomeness!. Graham Wheeler all those years back set the bar extremely high. It's fair to say that craft beer- and homebrewing in particular- have kicked off big time in the USA, which is unbelievable as going back twenty years the USA was in no way known for its beer (other than it being awful).
Of the three books, Radical Brewing had me laughing and nodding the most. This is a book that is packed to the rafters about all things brewing, particularly with an historical slant. Mosher has a very easy-going and humorous way of writing whilst passionately delivering fact after fact based on his obvious wealth of experience. By page 30, you'll be doing your first brew. By page 217, if you are brave enough you'll be brewing a lambic....although you might need to wait a while before you can drink it. By page 302, you'll at least be considering going pro and if not, at least you'll be joining a local homebrew club. Mosher's enthusiasm is utterly infectious.
If you are after a deep understating of where beer came from and how styles evolved over the years and have an open mind, then look no further than this outstanding book, it really is a must….along with Brew Your Own and Palmer!
Ler mais
2 pessoas acharam isso útil
Útil
Enviando feedback...
Agradecemos seu comentário.
Desculpe, o registro do seu voto falhou. Tente novamente
Informar abuso
Traduzir avaliação para Português

Mr P
3,0 de 5 estrelas Good content, abysmal formatting
Avaliado no Reino Unido em 9 de setembro de 2019
Compra verificada
The content is good and interesting, but the formatting is absolutely infuriating.
Recipes or extra bits of content are inserted into the middle of sentences, or sometimes even words, so you often have to turn a page, or sometimes even 3 pages to find the second half of the sentence you were in the middle of reading.

A couple of time is says “in the recipe below”, but the panel with the recipe will just have been shoved randomly in the middle of the paragraph discussing it.

S. Ryan
5,0 de 5 estrelas Buy this book if you’re a home brewer!
Avaliado no Reino Unido em 6 de abril de 2019
Compra verificada
I love reading this book, it’s so varied and was a good aid as I looked to get out of extract brewing in to all grain. Randy has a way of writing that is light hearted and doesn’t baffle you with chemistry, lots of tasty recipes which, if you don’t use them, you can still adopt his techniques when making similar styles of beer. I have how to brew and other books but this is by far my fave.
Ler mais
Útil
Enviando feedback...
Agradecemos seu comentário.
Desculpe, o registro do seu voto falhou. Tente novamente
Informar abuso
Traduzir avaliação para Português

romeo
5,0 de 5 estrelas embrace the spirit
Avaliado no Reino Unido em 2 de março de 2015
Compra verificada
I have just started doing 'home brew' & I have done a couple of LME following J Palmers guidelines. But I started getting to serious about the technical side with so many different thoughts/opinions out there it started to seem like a chore & was bogging me down.

This book has completely freed me to embrace a craft & create my own ambrosia & if it goes wrong so what. Very easy to read in an engaging style but I guess it is a bit like marmite
Ler mais
Útil
Enviando feedback...
Agradecemos seu comentário.
Desculpe, o registro do seu voto falhou. Tente novamente
Informar abuso
Traduzir avaliação para Português

Amazon Customer
5,0 de 5 estrelas This is a fantastic read for home-brewers
Avaliado no Reino Unido em 21 de agosto de 2014
Compra verificada
This is a fantastic read for home-brewers, being packed with useful tips and information, all delivered in a lucid and engaging style. I've been brewing for a while, but this has really opened up new avenues and motivated me to try out new styles and techniques.
Ler mais
Útil
Enviando feedback...
Agradecemos seu comentário.
Desculpe, o registro do seu voto falhou. Tente novamente
Informar abuso
Traduzir avaliação para Português

K. Møller
5,0 de 5 estrelas Fantastic, fun and precise!!!
Avaliado no Reino Unido em 21 de junho de 2008
Compra verificada
This is a book you'll read just for the fun of it, and when finished you'll have a lot of inspiration to brew with beers with an edge - and a lot of straightforward recipes to follow. This has certainly become one of my favorite books!
Ler mais
4 pessoas acharam isso útil
Útil
Enviando feedback...
Agradecemos seu comentário.
Desculpe, o registro do seu voto falhou. Tente novamente
Informar abuso
Traduzir avaliação para Português