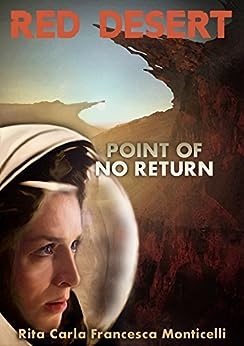 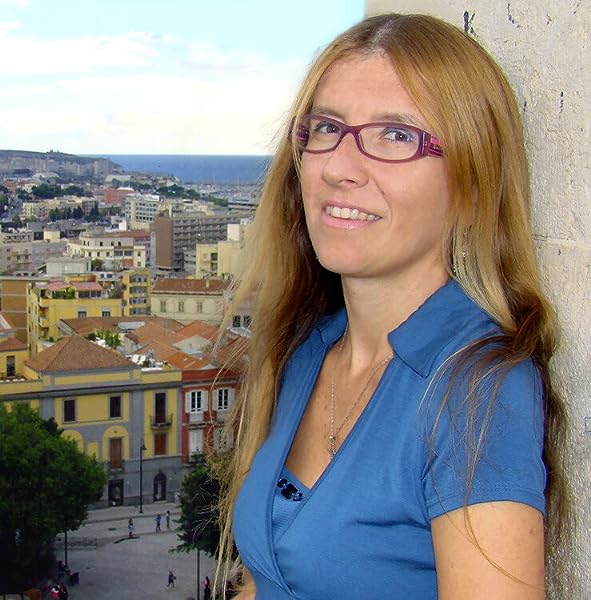 Thirty years after the Mars exploration mission Hera, whose crew died in mysterious circumstances, the ensuing political issues that slowed NASA’s race to conquer space have finally ended. This time the five members of the new Isis mission will not travel the 400 million kilometres for a short visit. This time they are destined to become the first colonisers of the Red Planet.

The science fiction series “Red Desert”, set in the near future, includes four books.
The first one, “Point of No Return”, is a novella.

In what looks like a suicide attempt, Swedish exobiologist Anna Persson, crew member of the Isis, secretly leaves Station Alpha at the crack of dawn to travel deep into the Martian desert in a pressurised rover.
As she journeys to the limit of her two day oxygen supply, she shows us memories of events from her past leading up to the mission. Little by little, as time and oxygen run out, she reveals the real Anna.
Whatever her goal, wherever it is, will Anna reach her destination?

The second book is “Red Desert - People of Mars” (a novel).

Rita Carla Francesca Monticelli is an Italian science fiction and thriller author.
She has lived in Cagliari (Sardinia, Italy) since 1993, earning a degree in biology and working as a writer, sci-entific and literary translator, and freelance web copywriter. In the past she also worked as researcher, tutor and professor's assistant in the field of ecology at Dipartimento di Biologia Animale ed Ecologia of the University of Cagliari.
As a cinema addict, she started by writing screenplays and fan fictions inspired by the movies. She has written original fiction since 2009.
Between 2012-2013 she published a hard science fiction series set on Mars and titled "Deserto rosso".
The series, which includes four books, was also published as omnibus in December 2013 & hit No. 1 on the Italian Kindle Store in November 2014.
"Deserto rosso" was published in English, with the title "Red Desert", between 2014 and 2015.
The first book of the series is "Red Desert - Point of No Return"; the second is "Red Desert - People of Mars"; the third is "Red Desert - Invisible Enemy"; and the final book is "Red Desert - Back Home". She also authored three crime thrillers in the Detective Eric Shaw trilogy - "Il mentore" (2014), "Sindrome" (2016), and "Oltre il limite" (2017) -, an action thriller titled "Affinità d'intenti" (2015), and four more science fiction novels titled "L'isola di Gaia" (2014), "Per caso" (2015), "Ophir. Codice vivente" (2016), & "Sirius. In caduta libera" (2018).
"Il mentore" was published in English by AmazonCrossing with the title "The Mentor" in 2015 (it hit No. 1 in the Kindle Store).
"Affinità d'intenti" was published in English as "Kindred Intentions" in 2016. All her books have been Amazon bestsellers in Italy so far. She's also a podcaster at FantascientifiCast, an Italian podcast about science fiction, an Italian Representative of Mars Initiative, and a member of the International Thriller Writers organization. She's often a guest both in Italy and abroad during book fairs, including Salone Internazionale del Libro di Torino (Turin Book Fair) and Frankfurter Buchmesse (Frankfurt Book Fair), local publishing events, university conventions as well as classes, where she gives speeches or conducts workshops about self-publishing and genre fiction writing. As a science fiction and Star Wars fan, she is known in the Italian online community by her nickname, Anakina. --Este texto se refere à edição paperback.

Linda Acaster
2,0 de 5 estrelas Writing Good; Not a Novel. Felt Cheated.
Avaliado no Reino Unido em 23 de setembro de 2021
Compra verificada
When I purchase Book 1 in a series of 4, that is what I expect to get. Four short books is fine, as long as they are each a book. This isn't even an 'episode', it is scene-setting and backstory which just stops in the middle of a scene. I should have read the reviews.

Which is a pity, because the writing is good, and I was intrigued by the main character's past life, giving the motivations for taking a one-way ticket to Mars with too small a group for safety.

TinTiger
5,0 de 5 estrelas Totally Recommend Red Desert.🐯🐯🐯🐯🐯
Avaliado no Reino Unido em 9 de março de 2016
Compra verificada
I've just finished reading this, I only planned to read a little but could not put it down, it was amazing. It's beautifully written and has a real story to tell - yes it ends on a cliffhanger but as you're made aware of this at the start it's not a problem. I was a little unsure of the narrative jumping between different times in Anna's life but soon realized how well this worked given her current predicament. It really is a quality sci-fi novella. I'm eagerly anticipating reading the next three Red Desert books - I've just bought them all because I thoroughly enjoyed Point of No Return. If you enjoy sci-fi, tales about Mars and excellent writing this is definitely for you. Totally recommend this book.
Ler mais
1 pessoa achou isso útil
Informar abuso
Traduzir avaliação para Português

Sara L.
5,0 de 5 estrelas A breathtaking adventure to the unknown
Avaliado no Reino Unido em 7 de abril de 2015
Compra verificada
I loved this book from the first page. It starts in the middle of the action, which caused a well-rounded surprise effect, and immediately moves the reader to Mars' surface as if everyone could travel in space in a blink of an eye.
But it isn't only the setting, the spectacular atmosphere, or the plot twists that made me turn page after page without breathing; I felt a complete identification with Anna, the protagonist. She's the core of the story—her actions, her feelings, and her choices. Through flashback the author tells us of Anna's painful past, her difficult relationship with her father and her lost love. She's so real and human even though she's a brilliant scientist; her personality is as strong as her abilities in this wild and danguerous world.
The author's style is modern and fluid, no one word out of place, and is able to convey the complex topic in a very simple way.

Carroll Grabham
5,0 de 5 estrelas Plenty of intrigue in this hard scifi thriller.
Avaliado no Reino Unido em 28 de fevereiro de 2020
Compra verificada
Rita has done a good job of setting up Anna and reeling us into a cliffhanger at the end. For a translation, it still engages us with the hard scifi aspects, particular the challenges of a one-way trip to Mars. She installs a ticking tension early on that pulls us through all the flashbacks in a simple but clever structure. Anna is not what or who you expect.
Ler mais
Informar abuso
Traduzir avaliação para Português

Henry
4,0 de 5 estrelas Good start but not really a full book
Avaliado no Reino Unido em 5 de agosto de 2015
Compra verificada
This is a cool start to a series. It's really a mini novel rather than a book in itself, and it hops around a lot from story to story which - whilst initially a fun story telling technique - gets very frustrating at some point.

Anna is a Swedish astronaut who, 30 years after a failed manned mission attempted to land on Mars, is part of a follow up mission of five people - she decides to make a one way journey and the story goes from there...