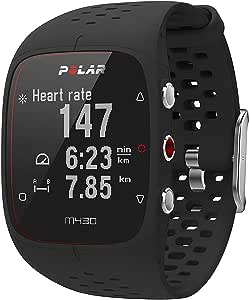 Carr
4,0 de 5 estrelas Possibly the only running watch you need
Avaliado no Reino Unido em 27 de outubro de 2018
Cor: PretoCompra verificada
Over the past year I have gotten more and more into running. First it started off with 1 or 2 runs a week, then I had what might be called an epiphany when I heard that you need to build your base by running sloooowly. This helped to improve my endurance and stamina and suddenly running became so much more enjoyable. I figured I'd put myself through a running program to improve. I love some stats and graphs, so I embarked on a major research project into finding the right GPS running watch for me. I already have a Polar HR monitor (H10) which I got over a year ago because it was cheaper than a watch and I wasn't that serious about training, just curious. It's very accurate, which seems to be what Polar's reputation is built on. So it seemed logical to stick with one brand.
What the watch does over the HR monitor is allow you to load a specific running program from the Polar Flow website, which then tells you what kind of run or exercise to do each day and what targets (heart rate and distance) to hit. The program is pretty comprehensive and includes easy, medium, interval and long runs, mobility sessions, and core and strength work outs. There are supporting Polar videos on YouTube for the recommended exercise routines for anything that's not running. If you follow the program, you will get better. I couldn't stick rigidly to the program due to work commitments but I still shaved 5 minutes off my 5k time in 3 months. Pretty chuffed. So you set up everything in the Polar Flow website, and then sync your watch. It's pretty simple and operates smoothly for me. Syncing with the Polar Flow app on my Android phone is a bit more hit and miss though. The watch also allows you to record your sessions doing a multitude of other sports - it will record your heart rate, time, and calculate calories burned based on your other metrics. It's waterproof so you can go swimming with it. It will record most things, but it doesn't automatically register laps. There is a manual option for this if you so wish. It will also monitor your sleep and churn out a report on it. I really only use it to log exercise sessions. Finally, it will do a "fitness test", which involves monitoring your heart rate while you sit or lie still.
As far as accuracy goes, wrist-based heart rate monitors are accepted as less accurate as chest-based ones, especially when you're doing interval work, but the Polar M430 is pretty good - accurate enough for me that I don't really use the HR10 much now.
GPS takes a few seconds to lock, and it's also very accurate, much more so than my phone, which was temperamental, and another reason why I went into the market for a GPS running watch.
Battery life lasts around 4-5 days for me, although this is mostly on standby as I only really wear it when I'm working out. Still, it's pretty impressive. I wore it fairly continuously when I first got it and had to charge it after 3 days. There is an option to have constant heart rate monitoring, which obviously uses more battery.
Finally, with regards to aesthetics, I wasn't sold on the look of it. It's quite chunky on my smallish wrist (I'm a 5'4" woman), and it's square design is definitely less common than the current trend of round faces. However it was the least important factor for me.
For what it's worth, initially I tried the Suunto Spartan, but this fell short on accuracy and was returned. I've met people who rave about Garmin, but I'd also read reviews about them having a cheap-ish build quality for the price, and the ecosystem seems to divide opinion like Marmite. Some guys who ran a running shop told me that TomTom was going to stop producing watches and so support would fade over time.
Overall, this ticks all the boxes that I wanted out of a running watch, with features and a build quality at a price that I think beats other alternatives.
Ler mais

R. Van
5,0 de 5 estrelas Does the trick
Avaliado no Reino Unido em 15 de outubro de 2017
Cor: PretoCompra verificada
I bought this for my partner who has started running seriously but isn't the best with technology. I have my own Polar HR monitor and like the intuitive interface. This watch is no different. Once you do a short setup where you answer questions about yourself (gender, weight, height etc) you're away!
She ran a half marathon with it recently and loved it - she had it on the screen that shows HR and min/km. I downloaded the software for mac and plugged in the watch, all looks very smart and well designed. The maps are accurate and the "relive" feature is particularly quirky, mixing your route, HR, pace and google images for the run you did.
The battery seems to last a while when it's not in use but still on.
Not much to moan about other than the price (and the well known accuracy issues with HR reading from the wrist).
Would definitely recommend if looking for this type of watch.
Ler mais
27 pessoas acharam isso útil
Útil
Enviando feedback...
Agradecemos seu comentário.
Desculpe, o registro do seu voto falhou. Tente novamente
Informar abuso
Traduzir avaliação para Português