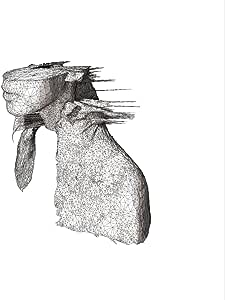 A Rush Of Blood To The Head (Vinyl) [Disco de Vinil]

2 lp set. A rush of blood to the head is a soulful, exhilarating journey, moving from the cathartic rock of 'politik' to the hushed tones of 'green eyes' without once breaking its mesmerizing spell. Singer chris martin takes his voice on soaring flights, reaching places only jeff buckley previously dared to go. Parlophone. 2005.

A. Moriarty
5,0 de 5 estrelas Amazing album sounds even better on vinyl
Avaliado no Reino Unido em 24 de março de 2017
Compra verificada
I am not going to go into details about how great this album is. It's all been said before, more eloquently than I can ever put it. The main reason for this review is that I have today added the Vinyl version of this album to my recently liberated LP collection and it sounds even more amazing in this format. It's as if Chris Martin and co. are in my living room playing just for me. Put the kettle on Chris, it's time for tea and biscuits. Very rock n' roll. The artwork and photos are great and it's just such a lovely thing to have. Having just had a nasty experience with another of my top 10 albums on vinyl (see my comments on Killers Hot Fuss), it's nice to get something that works just as it should and sounds better than it has a right to sound. One very happy whose confidence in vinyl has just been restored.
Ler mais
5 pessoas acharam isso útil
Informar abuso
Traduzir avaliação para Português

Leslie W P Garland
1,0 de 5 estrelas Noise, unless you like this sort of thing.
Avaliado no Reino Unido em 21 de maio de 2020
Compra verificada
I bought this CD for my wife because she professed an interest is Chris Martin and his group. We have listened to it a few times and I have yet to find any melody line, any tune. There is nothing that one can hum along to, or go away from and whistle afterwards. All tracks sound much the same - brutal noise - but with different lyrics. Goodness knows what the appeal is of this type of 'music'. As soon as the lockdown ends this one is going to the charity shop.
Ler mais
Informar abuso
Traduzir avaliação para Português

Matt182
4,0 de 5 estrelas A rush of great music to the ears!
Avaliado no Reino Unido em 13 de outubro de 2013
Compra verificada
A rush of blood to the head is Coldplay's second album, released 2 years after their debut album entitled Parachutes, in August 2002. It topped the UK Album Charts upon its first week of release in the United Kingdom, and became the eighth biggest-selling album of the 21st century in the UK. It has been since certified 8x platinum for its accumulated sales of over 2.4 million units in Britain and over 15 million worldwide. It is the best selling Coldplay album to date.

The album cover is a picture of a model with the top of her head chopped off, due to a scanning technique used. Martin explained that the album's title means "doing something on impulse" and is reflective of the theme of urgency prevalent through the album. The sound is a development from the first album, where they scrapped songs from the original completed album and begun working on new songs, showing their progression as musicians with extensive use of piano and acoustic guitar. They postponed the release of the album until they were satisfied with the final output with Clocks included, which wouldn't have made it onto the original album.

Politik is a really good start with a great sound, slow verses and a strong repetitive chorus. In my place is instantly recognisable from the intro riff and is 1 of the best songs with a strong sound throughout. It is the song Martin states kept them going when they didn't really know what they were doing in the studio. God put a smile upon my face is a cool song with an acoustic guitar backdrop and a standout sound. The scientist is another song instantly recognisable from the intro, with a moody trademark sound and a great sound throughout, as well as a catchy chorus. Clocks is 1 of the most recognised songs in popular piano music with a fantastic beat, sound and it's surely 1 of Coldplay's most well-known songs. Daylight has a fantastic sound with husky vocals in the verses and an attractive chorus. It's got a memorable ending with the repeated lyrics "slowly breaking through the daylight". Green eyes is essentially an acoustic song, with heavy use of acoustic guitar, it has a solid all-round sound with a catchy and uplifting chorus.

Warning sign is a sweet ballad with good use of guitar and piano. A whisper has a big, guitar driven sound with a repetitive swinging rhythmical chorus, a cool guitar sound and a dramatic verse/bridge. It's definitely a memorable track. I think that Cadbury's missed out on taking advantage of the chorus of this song. They could've used it in an advertisement for their chocolate bar! There's something infectious about it, I think it could've boosted sales! A rush of blood to the head is a strong title track with a great sound and thoughtful lyrics like "I'm gonna buy a gun and start a war, if you can tell me something worth fighting for". It tells of a man with these wild ideas and how he's blaming it on 'a rush of blood to the head' - impulsive urgency; which I think is smart. Amsterdam is a piano ballad which gets louder towards the end and then ends softly again with just piano. It's the most sombre song on the record and leaves a very mellow effect on me as a listener.

This is Coldplay at their best before they started writing pop songs which rely heavily on keyboards and electronics. This indie piano music is so much better than their current sound which caters to a larger audience with catchy pop songs which don't have the depth and quiet beauty these do. This music is standout because it doesn't sound like any chart music. If you want to hear Coldplay at their best then this is album is a fine example of that because there are no bad songs and this album has a few of their most well known tracks pre Viva la vida. It's one which I'd certainly recommend and 1 which doesn't need to grow on you because it's immediately attractive and effective from the first listen.
Ler mais
2 pessoas acharam isso útil
Informar abuso
Traduzir avaliação para Português

Dandylion
5,0 de 5 estrelas A game changer for the new Millennium
Avaliado no Reino Unido em 25 de abril de 2014
Compra verificada
I first became a fan of Coldplay in 2000- when they released their debut album 'Parachutes'. Since that very moment of becoming familiar with their trademark sound, I have been hooked. A Rush Of Blood From The Head is no exception, in fact, it is my favourite album of the past decade. From the first moment of piano-thumping power on 'Politik' to the final moment on 'Amsterdam' the listener is rewarded with rich tones of guitar sweeping ballads and a piano-laden lament for memories passed. Chris Martin's vocals seem to soar above the magnificent music, as he pours out his soul in an orchestral symphony of heartbreak, passion and foreboding warnings.

The signature song on A Rush Of Blood To The Head for me is definitely 'Clocks'. It seems to be a fan favourite too, but I simply can't deny the plethora of emotions compacted in to its heart, not to mention the hypnotizing piano riff from the opening second of the song. It is this very riff that takes the spotlight, driving the track forward on its haunting journey of distress and a longing for home. It also plays a big part as far as nostalgia is concerned as I first fell in love with it while on holiday in Los Angeles a few months after its initial release.

Another strong contender on this album is 'God Put A Smile Upon Your Face' with its gorgeous guitars and ever-powerful vocals from Chris Martin. The music video is also very imaginative and is only surpassed for creativity by 'The Scientist' (Which is surely one of the greatest music videos this side of the millennium.) Other concrete tracks are 'In My Place' and 'Warning Sign'.
Whether you're a Coldplay fan or not, this album is sure to leave you yearning for more- from its thought provoking lyrics to its incredible soundscape throughout- almost like a musical arc that runs through the album. A Rush Of Blood To The Head deserves a place in any music lover's collection and it is certain to stand the test of time. This was the album that inspired so many talented musicians and songwriters. In my humble opinion, it is Coldplay's Magnum Opus and I believe it will remain so until their very last album.

I have listened to countless albums and this became an instant classic for me. It stands proud on the foundations of flawless albums and believe me, there are not many. I would say this is the 'OK Computer' for a new generation and it's nothing short of 5 stars for me.
Ler mais
Informar abuso
Traduzir avaliação para Português

toby swannell
5,0 de 5 estrelas Brilliant album from Coldplay
Avaliado no Reino Unido em 5 de janeiro de 2015
Compra verificada
Vinyl arrived in good time and well packaged from Amazon. The vinyl itself sounds and feels great, the album is on a single disk but it's far better that way - The first side especially is just golden to listen to. Just please do this record justice and don't play it on a poor turntable.. (Yes, Crosley Cruiser, we're looking at you).

Back to the music, this album feels very complete in so many ways. 'Politik' is a superb opener, nicely followed up by 'In My Place' and 'God Put A Smile Upon Your Face'. The highlight of the album for me must be 'The Scientist'. It represents everything that makes Coldplay brilliant.

Personally, I feel that this album was made for vinyl. Skipping the tracks on a CD doesn't do it justice, listening to the whole album is just such a pleasure. If you do buy it on MP3 or CD, reserve some time to listen to the whole thing all the way through - It's stunning.

If I was to say one thing about the vinyl edition, an included lyric sheet/printed lyrics on the sleeve could have completed the package - but that's me picking holes.