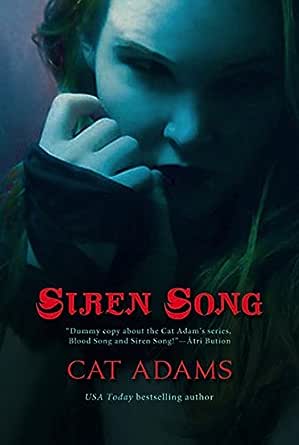 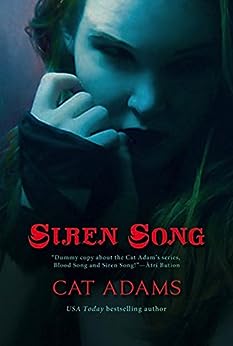 In Celia Graves's world, vampires roam the alleys of Tinseltown, street corner psychics have real powers, and cops use memory enhancement spells. But Celia thought she was an ordinary human, albeit one with a clairvoyant best friend and a ghostly little sister.

The vampire attack that made Celia an Abomination forces her to take food in liquid form and gives a whole new meaning to the word "sunburn." She's slowly adjusting (therapy sessions and all) when she discovers that the attack awakened a hidden part of her heritage: Celia is part Siren, able to enthrall men—and enrage women.

Her best friend's murder is unsolved; the cops think Celia should be in jail or staked; and her old lover, mage Bruno DeLuca, has something important to tell her. To top it all off, Celia's been summoned to the Sirens' island.

At the Publisher's request, this title is being sold without Digital Rights Management Software (DRM) applied.

Cat Adams is the author of the Blood Singer series, Blood Song, Siren Song, and Demon Song, as well as Magic's Design. Adams is also C.T. Adams and Cathy Clamp, authors of the Sazi and Thrall series and numerous other works.
Cathy Clamp lives in Texas. C. T. Adams lives in the Denver, Colorado, area.

Douglas C. Meeks
4,0 de 5 estrelas Series Got a bit Better but 5 Stars would be a lie
23 de abril de 2012 - Publicada na Amazon.com
Compra verificada
I enjoyed Siren Song more than I thought I would but it would have gotten a bit higher rating from me if she would have indulged my need (and those of most normal people) for revenge, I don't particularly care for forgiveness when it looks more like stupidity. The action was good, the finale was a letdown and something that was supposed to be important was ignored (maybe it shows up in the next book). I guess this is another really good story that was written with a bit less talent or too rushed to make it as good as it really could/should have been. 5 Star reviews for this book are ridiculous but make no mistake, this IS a great story and it gets a bit better with each book. I would still consider it highly recommended.
Ler mais
3 pessoas acharam isso útil
Traduzir avaliação para Português

Becca T.
5,0 de 5 estrelas Fabulous read!
15 de junho de 2016 - Publicada na Amazon.com
Compra verificada
I love the way Cat Adams writes. Celia is my absolute favorite character to read, right now. She has a good sense of humor and is snarky and sassy and the way Adams has built her character, you understand the underlying reasons for her attitude and worldview, but she is just so damn interesting. I usually prefer reading third person, sweeping epic novels, but Adams has me hooked. I've just finished the third book and I cannot wait to read the rest of the series. Truly phenomenal writing and a captivating story.
Ler mais
Traduzir avaliação para Português

Taylor S.
3,0 de 5 estrelas Good, but too full
24 de setembro de 2016 - Publicada na Amazon.com
Compra verificada
The writing style is great and the characters awesome, but there's so much in this novel that doesn't really seem to be connected. It could have easily been two novels. Some of the events are too short and feel as if their only purpose is to get you to the next event. While some novels are more like a series of events in a character's life, this one doesn't really feel like that. It feels more like a intro, rising action, climax, and falling action that had small falls as events that were pretty significant were wrapped up very quickly.
Ler mais
1 pessoa achou isso útil
Traduzir avaliação para Português

Lily Rose
5,0 de 5 estrelas Check Mate
13 de fevereiro de 2011 - Publicada na Amazon.com
Compra verificada
My top reasons to love this book:
1. Urban Fantasy with lots of world building.
2. Strong female protagonist, Celia Graves, in the first person point of view.
3. Lots of multi-tasking in the plot department that weaves seemingly unrelated story lines into 1 tightly woven ending.
4. There is a romance sub-plot, but it was definately not up front and center. FYI:There were no sex scenes, so if you are looking for paranormal romance look elsewhere.
5. This is what a book 2 should be! Lots of back story on her siren abilities, which included meeting her royal extended family.
6. Lots and lots of action. There was alot of mini adventures. Sometimes, even I was overwhelmed by the quick transitions from one sub plot to another and I love a book with an adreniline junkie plot. This one was really a lot of fun!

My top reasons not to love this book:
1. OK. This is really a criticism about the first book, but since I didn't write a review for it, and the ex is in this one, here I spout. I think it is lazy for an author to have an ex-boyfriend be the love interest in a book. We don't know him, we didn't get to see the sparks fly when they first met, and I feel that the make up sex happens too quickly. I hope the Deluca, the ex, stays the ex, reguardless of her "siren" committment issues. Creed, the business associate, was intriguing in book 1 and now I am rooting for him in book 3.
2. The last 25% of the book had sloppy setting transitions. At times I was disorientated as to where they were after a scene break. I even went back to reread to make sure I didn't skim something important. It did make for a long (although it didn't seem long) fast reading through to the end though.
3. There were several spelling errors, gramatical, and punctuation errors in the kindle version. It didn't slow me down! (I often have those in my reveiws!)
4. You should read book 1 before this one.
5. I like Celia, but I need to see more emotional growth from her. Maybe less description of the settings and more of her feelings. Like near the beginning, when she was in Birchwoods (psychiatric/rehab facility) she discussed with her therapist things that left her crying. I wanted to know specifically what was making her cry.

My biggest regret about this book is that it sat in my kindle unread for 5 months (I pre-ordered). My best mistake is that now I will only have a few weeks before book 3 is out. YEAH! I really enjoyed this book 2. I felt handled by an experienced story teller and I feel my faith renewed in the "newer" authors in UF.