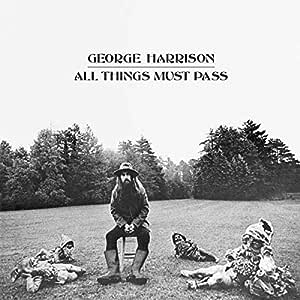 All Things Must Pass was released by Apple Records in November 1970. Co-produced by Harrison and Phil Spector, many musicians contributed to the album, including Eric Clapton, Ringo Starr, Billy Preston, Pete Drake, Gary Wright, Klaus Voormann, members of Badfinger, players from Delaney and Bonnie band, and John Barham. The triple-LP topped charts around the world and earned universal acclaim as a rock masterpiece.

Crowshott
5,0 de 5 estrelas The Best post Beatles Album
Avaliado no Reino Unido em 25 de outubro de 2019
Compra verificada
Is this the Best post Beatles album. Lennon had Imagine, McCartney had Band on the Run. Harrison had All Things Must Pass. He clearly had a beautiful collection of songs which never made the Beatles Albums. Using Derek and the Dominos band. With some additional players, Ringo, Alan White, Klaus Voormann, Billy Preston, Garry Brooker, Ray Cooper and even Dhani Harrison on My Sweet Lord on this anniversary issue. This is an excellent example of his fabulous talent. Beautifully packaged. Beautiful songs. Yes this is the best of the post Beatles albums. A must for all fans
Ler mais
5 pessoas acharam isso útil
Informar abuso
Traduzir avaliação para Português

customer 12345
5,0 de 5 estrelas Great Supplier , Fantastic sounds, smiles all round !
Avaliado no Reino Unido em 17 de janeiro de 2019
Compra verificada
Redrocksrecordspoole need to be congratulated at the highest level ! I was initially disappointed by the late delivery/loss of this album . . . . . BUT. . . . they really went the extra mile to rectify the problem ( and I will certainly seek them out and look to them as a preferred supplier from now on ) EXCELLENT customer service it seems being a customer to your company really matters to you which is VERY PLEASING in this day and age ( Thank you ).

The original tracks from the album have put a smile on my face all afternoon and I am looking forward to getting pleasure from the 2001 mixes which were remixed under Georges supervision .
It was always one of my 'go to' albums and to anyone who didn't buy it at the time , I would strongly recommend your​ adding it to your collection . Part of the genius that was The Beatles at his best . BUY IT !
Ler mais
5 pessoas acharam isso útil
Informar abuso
Traduzir avaliação para Português

Luke James
5,0 de 5 estrelas George's Masterpiece
Avaliado no Reino Unido em 18 de outubro de 2017
Compra verificada
This is George's masterpiece. Full of beauty, the songs range from the sublime My Sweet Lord to the rollicking Wah-wah, with George's unique way with a melody and lovely slide guitar featuring throughout.

There are so many great songs on here - Beware of Darkness, I'd Have You Anytime, Isn't It A Pity and the title track to name just a few. The production is warm in that lovely natural 70s way, and the performances throughout are bang on.

70's rock lover!
5,0 de 5 estrelas Very good
Avaliado no Reino Unido em 12 de agosto de 2016
Compra verificada
This album deserves 4.5 stars. This is a very good album. Fairplay, George Harrison did succeed in delivering a well rounded triple album, and the songs highlight the best of that era and the best of Harrison. It's very much an ensemble piece, of course, yet at the core is his songwriting. Don't get me wrong, as much as I enjoyed this album and agree it does deserve to be highly regarded, some critics do go overboard. It does hold up well, but some of the songs are quite simple. I look at it more as a collection of great songs and jamming, not of completely masterful songwriting. Some of the critics seem to go ga ga of the writing, yet I was quite surprised in their simplicity. I realise the following songwriters/lyricysts are all different, yet don't expect a Dylan, or Neil Young or Bernie Taupin etc. Regarding the jams, I know some critics have not been kind towards them. I disagree. Obviously if you don't like jamming and/or instrumental numbers, they wont appeal to you however, I think they serve the album well, (minus the 'It's Johnny's birthday', which is just random as hell). For anyone who appreciate AOR, or just love the vinyl era, purchase this. I knew nothing really of Mr. Harrison prior to listening to this, yet I sat through this album twice, in its entirety. It was a very quick 100 minutes...which is a good thing of course.
Ler mais
8 pessoas acharam isso útil
Informar abuso
Traduzir avaliação para Português

R.A.S.
4,0 de 5 estrelas another review, different CD same Artist
Avaliado no Reino Unido em 27 de fevereiro de 2014
Compra verificada
George Harrison, could really reach inside your heart with some of his tracks and it was as if he had experienced some of the same things I have. Well why am I surprised many people have had similar if not the same experiences, difference being we are not all talented in the music composing department like he was. But we are able to choose what one of the many different genres and songs he wrote to suit many moods. This CD has many such tracks. A mixture. Sadly I think Mr Harrison was underrated during his lifetime, maybe not though in his reality, I was just a listener and still am of many genres of music, I didn't really think about the people behind that music I was just thankful for music I love and like, George made that. I know he also had a film company too but, it's his music that fascinates, moves and gives my ears enjoyment as well as being impressed by how diligent he was in producing it. After watching a documentary about him, yes I was around when the Beetles were together, but we never really heard much about or from Mr Harrison as I would have liked, having seen the documentary I learned just how versatile he was in producing pleasing, melodic, rock, ballads and even a bit of country style, as well as folk with incredible production. And what a deep thinking man he was. That is obvious in his music that thankfully has not died.
CD delivered during time specified by seller and in perfect condition.
Ler mais
3 pessoas acharam isso útil
Informar abuso
Traduzir avaliação para Português
Visualizar todas as avaliações
Tenha frete GRÁTIS ilimitado, filmes, séries, músicas e muito mais.
Os membros Prime aproveitam em uma única assinatura frete GRÁTIS e rápido, além de conteúdo de entretenimento, como filmes, séries, músicas, eBooks, revistas e jogos por apenas R$ 9,90/mês.
> Aproveite agora
Voltar ao início
Conheça-nos
Ganhe dinheiro conosco
Deixe-nos ajudá-lo
Pagamento
E não se esqueça:
© Amazon.com, Inc. ou suas afiliadas