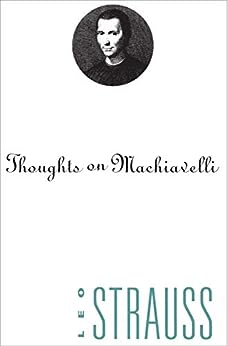 Leo Strauss argued that the most visible fact about Machiavelli's doctrine is also the most useful one: Machiavelli seems to be a teacher of wickedness. Strauss sought to incorporate this idea in his interpretation without permitting it to overwhelm or exhaust his exegesis of The Prince and the Discourses on the First Ten Books of Livy. "We are in sympathy", he writes, "with the simple opinion about Machiavelli (namely the wickedness of his teaching), not only because it is wholesome, but above all because a failure to take that opinion seriously prevents one from doing justice to what is truly admirable in Machiavelli: the intrepidity of his thought, the grandeur of his vision, and the graceful subtlety of his speech". Strauss himself was sensitive to that "subtlety of speech", and responded to it in kind even as he labored to put the message it carried before the reader. Thoughts on Machiavelli is not a Machiavellian book, but it respects the genius of the Florentine author, and pays him the respect of using his artfulness with grace and restraint. This critique of the founder of modern political philosophy by this prominent twentieth-century scholar is an essential text for students of both authors. --Este texto se refere à edição paperback.

Leo Strauss (1899-1973) joined the University of Chicago as professor of political philosophy in 1949 and was later named Robert Maynard Hutchins Distinguished Service Professor Emeritus in political science. His many books include "Liberalism, Ancient and Modern," and "The City and Man," both available from the University of Chicago Press. --Este texto se refere à uma edição esgotada ou disponível no momento.

David
5,0 de 5 estrelas A Grateful Slog
Avaliado no Canadá em 3 de novembro de 2009
Compra verificada
Strauss is such a careful reader that he can be very convincing in an almost unconscious way, but we should remember that Strauss has his own agenda and that his Machiavelli is quite unique. I almost think this book should be read more to understand Strauss than to understand Machiavelli.

He carefully guides the reader toward his theses, though just as often he seems to guide the reader toward some thesis without explicitly stating it. It is surprising that the most bold elements of his interpretation seem to be wholly original. That originality should raise suspicion--did Machiavelli hide his intention so well that it took five centuries to be discovered? Strauss is careful to justify his moves, but it is possible that his interpretation reads too much into the texts or even that Strauss intentionally uses Machiavelli as he claims Machiavelli used Livy.

In the humanist-republican reading, Machiavelli's teaching that the end excuses the deed is excused through his patriotism. Strauss, on the other hand, argues that Machiavelli uses patriotism to veil his true aim which is to question the status of morality itself. For Strauss, Machiavelli marks the birth of modern philosophy because he reasons about everything rather than relying on authority. Further, in Machiavelli's writings, the meaning of philosophy undergoes a change: the city, not the soul, becomes the ultimate end. Philosophy takes as its standard the low but solid foundation of how men live. Since it is based on how men live rather than how they should live it is more likely to be actualized, but forgoes excellence.

Although "Machiavelli does not bring to light a single political phenomenon of any fundamental importance which was not fully known to the classics," he "is more responsible than any other man for the break with the Great Tradition." This is because he turned an esoteric teaching into a public teaching. Since he propagated in his own name a teaching that the ancients only dared put in the mouths of others, he is "an evil man." Not only that but whereas the Republic attempts to refute the argument of Thrasymachus, Machiavelli attempts to dethrone Biblical religion and classical political philosophy. The classical teaching on realism was part of a greater whole; Machiavelli believes he has discovered a new teaching only because he has forgotten the whole of which that teaching was only a part. These are some of Strauss' claims.

His interpretation is brilliant, but he oversteps the case by focusing too much on the ideological aspects of his argument. Machiavelli goes to the heart of the political problem, but Strauss--and, even more so, some of the Straussians--transfers the problem to the ideological realm by making Machiavelli about spiritual warfare. Strauss makes Machiavelli the lynchpin of his grand narrative of western thought.

One knows what to expect from those who pursue Strauss' Machiavelli: numerology; ascents and descents; spiritual warfare; indignation over the elevation of the people above the aristocracy; lamentation for the degradation of the human to half-man, half-beast. Yet Strauss and his followers don't even seem to suspect that by warfare Machiavelli--the former Secretary of the Ten of War--actually means warfare. Based on their assertion, they can take anything he says about war to apply to spiritual war against Christianity and classical political philosophy. For example, Strauss writes: "Towards the end of his work, [Machiavelli] indicates his procedure by the following sentence: 'Although to use fraud in any action is detestable, yet in the conduct of war it is praiseworthy and glorious.'" Strauss' comment shows how he, and his followers, can find an "esoteric" meaning in any sentence. But to read that sentence as an esoteric statement by Machiavelli about his own procedure turns Machiavelli into a puppet. The sentence addresses a life-and-death question about the conduct of war. Machiavelli rejects both the Christian opinion of Thomas Aquinas and the Stoic opinion of Cicero regarding the use of fraud. Strauss' esoteric technique can take on a parasitical life of its own, but the literal meaning is often more interesting and more important than the alleged esoteric meaning. Likewise, placing his texts in their historical context is often more illuminating than interpreting them in the light of an esoteric reading. One must wonder if his followers are in on an act of fraud or truly believe that almost every sentence can be read esoterically as a comment about Machiavelli himself or a critique of Biblical religion. In the esoteric reading what Machiavelli does not say becomes as, or more, important than what he does say. But if we are reading silences shouldn't we be especially cautious? Strauss creates a metaphysics of presence based on absence--on what Machiavelli does not say. He writes that "Machiavelli's Livy is a character of Machiavelli." Could it be that Strauss' Machiavelli is a character of Strauss? If so, what role does he make Machiavelli play?

Strauss' interpretation is haunted by the likelihood that Strauss himself writes esoterically about Machiavelli. We know that Strauss prefers classical political philosophy. The ancients knew the esoteric teaching but put it in the mouths of others. Is it possible that Strauss damns Machiavelli in order to save the esoteric teaching? At various places in the book, he briefly points out the key points on which Machiavelli and classical political philosophy agree, including the fact that Plato's ideal regime is founded on immorality. If Strauss himself holds a secret teaching, for what reason does it need to be secret? It could only be because he thinks it is too dangerous to be a public teaching.

Even if one questions his characterization of Machiavelli as a megalomaniac "teacher of evil" whose primary intention is spiritual warfare, his book lays a rich ground for thinking about Machiavelli, western philosophy, and Strauss' own philosophy. However, his resistance to reading Machiavelli in his historical context increases the risk of unintentionally importing concepts foreign to Machiavelli into one's interpretation. Reading historical scholars like Felix Gilbert and Maurizio Viroli is a good countermeasure.
Ler mais
2 pessoas acharam isso útil
Informar abuso
Traduzir avaliação para Português