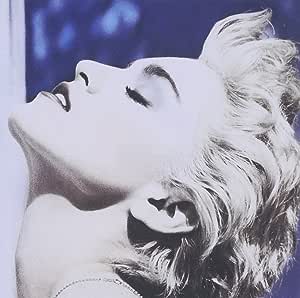 A quintessential '80s pop artifact, Madonna's third album was a huge musical leap forward and ranks with Like a Prayer and Ray of Light in the top echelon of her works. Only the title track (a bit too obviously a '60s girl-group homage) and the fine-but-nothing-special "Jimmy Jimmy" slightly lower the quality bar. Most of the songs share a jittery dance-pop sound, edgy, distracted, and nerve-jangling but simultaneously invigorating and exhilarating and almost dangerously giddy--a perfect soundtrack for the mid-'80s. Highlights include the hedonist's credo of "Where's the Party," the subtle and pretty Latin pastiche "La Isla Bonita," and, towering above all, three stunning mega-hits. "Papa Don't Preach," with its gorgeous pseudo-classical strings intro, is a sumptuous airwaves banquet, as Madonna wrestles with the have-the-baby-or-give-it-up dilemma (abortion's not in the picture) in newly gritty tones. "Open Your Heart"'s marriage of jitter-pop and wistful melody underscores the singer's yearning but forceful stance ("You better open your heart to me, buster"). And "Live to Tell" is a riveting ballad, lushly melodic yet spare and haunting--a place, as the song says, where beauty lives. --Ken Barnes

Scarlet Jupiter
4,0 de 5 estrelas 162. Blue Madonna (2016 LP reissue)
Avaliado no Reino Unido em 30 de junho de 2016
Compra verificada
Madonna's third studio outing stands as one of the greatest pop albums of all time. Taking a different direction from her first records, addressing a variety of issues, and incorporating many genres, "True blue" built on "Like a virgin"'s solid foundations, and established Madonna as the ultimate pop idol and a global superstar. Complete with its creator's new, more subdued image, it had all that was needed in order to engage an older audience who might have been skeptical of her music and attitude back then. The string of 5 singles off this album ("Live to tell", "Papa don't preach", "Open your heart", "True blue", "La isla bonita") is arguably among M's most successful as well as her strongest. Demonstrating her skills as a songwriter and entertainer through its poignant mixture of topics and great tunes, the album became her rite of passage between girly pop and adult pop, and the archetype of '80s and early '90s pop music, marking an era where music and fun were genuine, innocent, carefree and meaningful. At that time, it was only Madonna and Michael Jackson who presented such brilliant records, with spectacular accompanying videos, creating a buzz that extended beyond just the music. M was "Causing a commotion" so great that, by the time her tour came to an end, noone asked "Who's that girl" because she was so famous that could be recognised even with her back turned! This brand new 180 gram vinyl reissue is faithful to the original pressing of this career-defining highlight. June 30th, 1986: 30 years on, "it all seems like yesterday, not far away"...

- Madonna dedicated the album to "the coolest guy in the universe", her then husband, Sean Penn, who also provided the title for it, from a favourite expression of his
- The album opened at the top of the UK Albums Chart, making it the first album by an American artist to debut at No. 1 in UK chart history. It remained at the summit for 6 weeks and on the chart for a total of 85 weeks
- In the US, it opened at No. 29, but soon went to No. 1, where it remained for 5 weeks and on the chart for a total of 82 weeks
- It topped the European Top 100 Albums chart for 34 consecutive weeks, a record that has yet to be broken
- It reached the No. 1 spot in 28 countries across the world, and has sold 25+ million copies, making it one of the best-selling albums of all time
- The song titles on the album's back sleeve and inside booklet do not feature M's own handwriting but Jeri Heiden's, the album's cover designer
- The album's original photo was taken in black-and-white, however, in order to go along with the title, a hand tinted blue-toned version of the image was chosen as the final cover artwork. The cassette tape edition featured a longer picture than the LP and CD album's cropped image
- In the US and Canada, the cover did not have any logo, but for the European nations, Warner felt that M's name was needed, as they did not want to take chance with her popularity
- "La isla bonita", a tribute to the beauty and mystery of Latin American people, was written for Michael Jackson's "Bad" album. Similarly, "Open your heart" was originally intended for Cyndi Lauper
- The album gave M her first appearance on the Guinness Book of World Records. M, also, became the first female artist to receive the Video Vanguard Award at the 1986 MTV Video Music Awards in recognition of her impact on popular culture

Stella Starnes
5,0 de 5 estrelas "True Blue"
Avaliado no Reino Unido em 28 de setembro de 2015
Compra verificada
A truly fantastic CD Album, "True Blue" contains a terrific collection of songs, including favourites that I've constantly listened to on Youtube up till now, most notably the title track of "True Blue", "Papa Don't Preach", Open Your Heart", "Live To Tell" and "La Isla Bonita". As well as these, I simply love "Jimmy, Jimmy" for the way it pans out like a ballad on foolishly loving a fool, and in contrast to this, I admire "White Heat" for the lyrics "Get up, stand tall, put your back against the wall, coz my love is dangerous"; it seems to show that love can be as dangerous as it can be foolish (and more besides), without being overly explicit, which is one of my pet hates. Out of the two bonus tracks, I find that the remix of "True Blue" is just a little odd with the incredibly short yells of "Hey!" and laughter, but otherwise it's still good. I particularly love the remix of "La Isla Bonita"; the extended music, coupled with chants of the title lyrics and those of ' "Spanish lullaby" ' are wonderfully haunting and make me wish that I was wearing Madonna's red flamenco dress while sitting next to the gorgeous Spaniard who plays the guitar on her Youtube video. I am very happy with this purchase; it came in great condition and bang on time along with my other Album of "Confessions on a Dancefloor" and is great to listen to.
Ler mais
3 pessoas acharam isso útil
Informar abuso
Traduzir avaliação para Português

G.Manton
5,0 de 5 estrelas Never be blue
Avaliado no Reino Unido em 15 de março de 2018
Compra verificada
Along with 'Like A Virgin' this album from Madonna was definitely her at the height of her musical career. True Blue was a gem of an album and had plenty of hit singles taken from it, the title track True Blue, then Papa Don't Preach, Open Your Heart, La Isla Bonita and the beautiful ballad Live To Tell, which back then in my college days reflected how I was feeling at the time. I'd go as far as saying that this album is her best work ever.
Ler mais
1 pessoa achou isso útil
Informar abuso
Traduzir avaliação para Português

David F
4,0 de 5 estrelas Not the 2019 reissue
Avaliado no Reino Unido em 26 de abril de 2020
Compra verificada
If you are planning on ordering the, please be aware of two things:
1. It is the 2016 reissue on black vinyl, NOT the 2019 clear vinyl version
2. The cover and inner sleeve are very poor quality, faded and look like a photocopy. You do get a mini poster inside though.