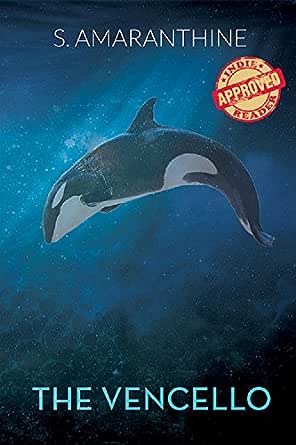 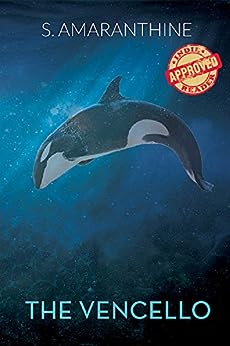 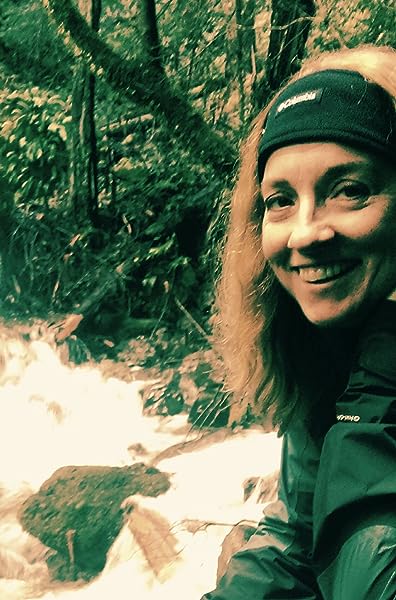 THE VENCELLO by S. Amaranthine is a marvelous book, evocative in style and subject matter of sci-fi greats like Margaret Atwood or Octavia Butler. The book tells three main stories, centered on a human cetacean researcher, an Orca matriarch, and a curious sperm whale. By the end, the stories all conjoin during a momentous event that both satisfies readers and leaves them with burning questions.
Using omniscient narration, author S. Amaranthine is able to take us–not just inside the heads of her human characters, but the heads of the whale characters as well. Her well-researched insight into what the world of whales looks like—or, more importantly, sounds like—helps seemingly abstract scenes make sense of how the story unfolds. It’s the whale characters readers can turn to in order to find definitive answers about the larger story, because they perceive things so differently than the human characters.
The drawback to this story is that since Amaranthine deals in very strange concepts, it can be a challenge for readers to follow along with what precisely is happening. But even in these places, what’s lost in the details doesn’t leave the reader lost in the narrative. For example, readers may never quite understand how exactly Brough and Param, the two oldest sperm whales in the world, share their knowledge with each other. Yet why they do this and what conclusions they draw from this exchange are as plain as a whale breaching the surface of the ocean.
The human and cetacean characters have parallel motivations and their ultimate goals mirror each other. Delora, a human, and Akenehi, an Orca matriarch, both suffer great losses and are eager to change their circumstance. Delora wants to go backwards, to “time travel” to fix her problems, but Akenehi wants to jump-start her species further evolution to protect her clan in the future. Similarly, Liam, a human, and Brough, the younger of the two ancient sperm whales, are trying to understand what is happening between Delora and Akenehi. Whereas Brough fears what an alliance between the two greatest predators to his species—Orca and human, in that order—Liam wants to gain his understanding by being a part of whatever is happening.
At its core, this story is a lyrical exploration of love and loss, hope and despair, and the ultimate connection we share to our universe. The messages present in Amaranthine’s story are not preachy, but carefully ingrained into the arc of the characters’ stories, so that readers are able to draw their own conclusions about what those messages might be. While this is the first book of a trilogy, it’s excellent as a stand-alone story that will send readers back to the front page for another read-through.

Wendy
5,0 de 5 estrelas A riveting Sci_fi on a new possibility transcending interspecies connections
Avaliado nos Estados Unidos em 2 de setembro de 2015
Compra verificada
Rising from the depths of despair, two mothers grieve the death of their beloved sons. The catch is that these mothers are of different species, yet both highly intelligent. One is human and the other orca. Then with the unknown assistance of another more intelligent and sentient being, a sperm whale, the three beings join forces and happen upon the power of creation! After reading this metaphysical creation story readers come away with a new respect and understanding of the importance of our oceans and the highly intelligent beings which inhabit them. For me this book, the first in a trilogy, revealed the intelligence alive in the oceans. I appreciate how S. Amaranthine developed a perspective from the whale point of view. I hope this book touches many people so that is may raise awareness and concern for the worlds oceans. This book will raise the readers awareness of cetaceans and their environment.
Ler mais
1 pessoa achou isso útil
Útil
Enviando feedback...
Agradecemos seu comentário.
Desculpe, o registro do seu voto falhou. Tente novamente
Informar abuso
Traduzir avaliação para Português