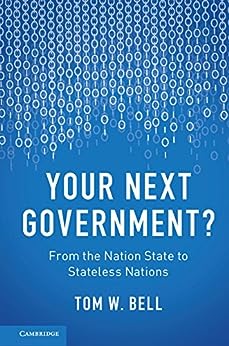 Your Next Government?: From the Nation State to Stateless Nations (English Edition) eBook Kindle

Tom W. Bell earned his J.D. from the University of Chicago in 1993, then practiced law in Silicon Valley and Washington, DC before serving as a policy director at the Cato Institute. In 1998, he joined the faculty of Chapman University, Fowler School of Law, where he teaches all of the first-year common law courses and electives in high-tech and intellectual property law. Bell's prior publications include Intellectual Privilege: Copyright, Common Law, and the Common Good (2014). Through Archimediate LLC, Bell advises companies developing special economic zones on the design, installation, and support of legal systems. --Este texto se refere à edição paperback.

Rob Nielsen
4,0 de 5 estrelas Open-source legal code for the operating system of human society
Avaliado nos Estados Unidos em 26 de novembro de 2018
Compra verificada
Societies must be built on trust, and trust that the rules of society apply to all individuals equally (i.e. the rule of law) is the most economically valuable thing in the world since that trust is the basis for everything from justice to the division of labor.

Can competition for governance services make those services better and cheaper? Like many libertarians, Tom Bell thinks so. It works for every other product and service on the market, why not law and order?

Where can actual consent of the government be allowed, since nation states currently claim ownership of everything? While libertarians are waiting for a critical mass of freedom lovers to plan for secession (some interesting anecdotes about Liberland are included), Tom suggests that special jurisdictions within nation states are a way to explore the continued evolution of the best practices of common law. These special jurisdictions would allow for more local determination, much like Hong Kong did for Asia in the 20th century. The most recent attempts at creating such special jurisdictions are special economic zones in the United States (called USSEZs), Honduran ZEDEs, and seasteads like the one currently planned for development near French Polynesia.

As a framework for documenting that evolution, Tom offers Ulex, an “open-source legal system” that is intended to operate much like computer code, both technically and theoretically. Like computer code, it imports standard instructions from existing best practice implementations of basic rulesets and offers customization to those who implement it. Computer code determines how computers will send and respond to signals, while legal code determines how societies will send and respond to signals. In both cases, the rules must be consistently applied to prevent everything from small glitches to potential system-wide failure.

In addition to some overdue tort reform measures (e.g. the losing party pays the winning party’s legal costs), Ulex offers meta-rules for dealing with alternative/conflicting rules and an “optional” criminal law module for potential adoption by a host sovereign.

The book has a theory section, but the Facts section and the Practice section weave together important examples to apply the fundamental principles of consent and equality before the law, among them advocating for the abolition of governmental immunity.

After reading it, I'm still unconvinced that seeking government permissions and exemptions is likely to result in the advancement of the agendas of both freedom lovers and tax-hungry government bureaucrats. In any case, I think Ulex offers the kind of framework around which the restoration of the evolution of common law can take place.